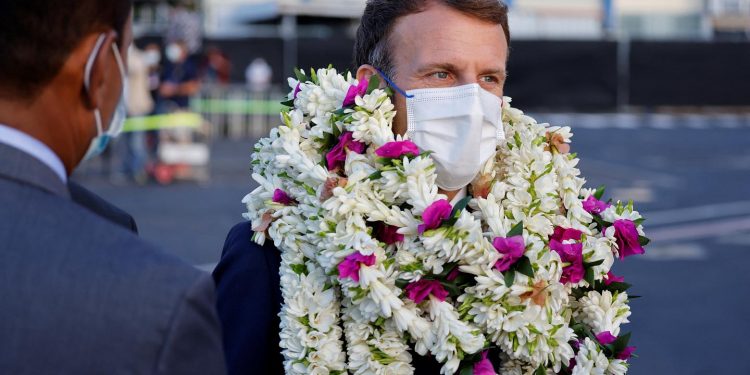 Brussels (Brussels Morning) President Emmanuel Macron arrived in French Polynesia on Saturday night, his first official visit there, and a stop on his “tour de France” visit to the region ahead of next year’s presidential elections. His visit also serves to highlight the importance France places on its presence in the Asia-Pacific region.

Arriving in the Polynesian capital Papeete, Macron went direct to a local hospital, where he called on the population to get vaccinated against COVID-19, since vaccination rates there lag far behind those of mainland France.

On Sunday, Macron backed a bid by the Marquesas Islands to gain UNESCO world heritage status. In doing so, he presented a unique image, being the only man in a suit, as he posed amidst traditional dancers and musicians wearing costumes made of leaves.

The citizens of French Polynesia expect that the President’s visit will also touch upon a sensitive issue for the French republic – the legacy of the nuclear weapons tests that were conducted in the territory, back in the decades when France was actively developing nuclear technology.

Less than 100 Polynesian civilians have been awarded compensation for exposure to radiation since the tests were concluded in 1996. Many more believe they should be entitled to some sort of restitution. The legacy of the tests has fueled resentment about French colonialist attitudes towards the overseas country, a feeling that has been reinforced by recent reports that the radiation impact was far more extensive than the authorities have publicly acknowledged.

Citing a presidential official, France24 reports that Macron plans to take steps to address the issue, initiating a dialogue with civilian representatives, opening up the state archives, and discussing individual compensation for those who were personally affected by radiation.

Macron’s visit also serves to emphasise the French global reach, especially its presence in the Asia-Pacific region, where China is increasingly making aggressive territorial advances by ignoring international tribunal rulings and forcibly seizing reefs and atolls. The French navy has already stepped up its activities in the disputed South China Sea this year, with the passage of a nuclear submarine in February, and the transit of its assault helicopter carrier Tonnerre in May.