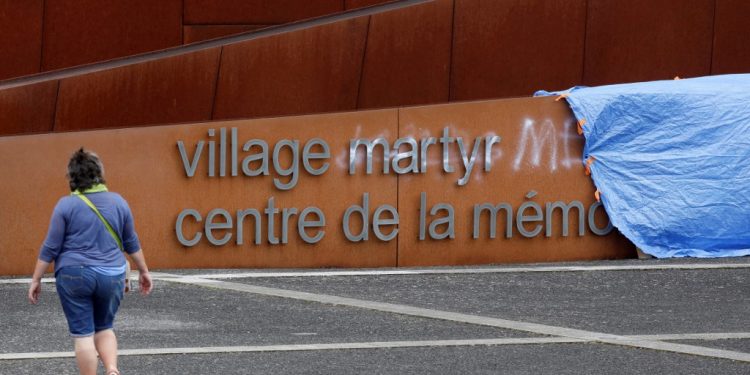 A visitor looks at graffiti tags seen on the lettering at the entrance to the Centre of Oradour sur Glane Memory, the village where German Waffen-SS troops massacred 642 of its inhabitants in June 1944, in Oradour-sur-Glane, west-central France, on August 22, 2020. - The tags at the entrance to the ruins of the martyred village of Oradour-sur-Glane (Haute-Vienne) have provoked indignation in recent hours, with French President Emmanuel Macron promising that 'everything will be done' to find the responsible person. The tags were discovered on August 21, during the opening of the memorial centre. (Photo by PASCAL LACHENAUD / AFP) / The erroneous mention appearing in the metadata of this photo by PASCAL LACHENAUD has been modified in AFP systems in the following manner: [1944] instead of [1942]. Please immediately remove the erroneous mention from all your online services and delete it from your servers. If you have been authorized by AFP to distribute it to third parties, please ensure that the same actions are carried out by them. Failure to promptly comply with these instructions will entail liability on your part for any continued or post notification usage. Therefore we thank you very much for all your attention and prompt action. We are sorry for the inconvenience this notification may cause and remain at your disposal for any further information you may require.

Emmanuel Macron has said everything will be done to find those who desecrated a memorial to France’s worst Nazi massacre.

The French president said the graffiti sprayed at Oradour-sur-Glane was an “unspeakable act” as politicians denounced the attack.

Police are investigating after a sign at Oradour, in the Haute-Vienne region of south-central France near Limoges, was defaced with the word mémoire (memorial) sprayed over and replaced by menteur (liar).

The desecration has caused national outrage across France, where Oradour remains a potent physical symbol of Nazi brutality.

On 10 June 1944 – four days after the Normandy landings – a 200-strong detachment of the 4th SS Panzer Grenadier Regiment, part of the notorious Das Reich division, marched into the village.

In retaliation for the reported kidnapping of a Nazi officer and attacks by the French resistance in the region, they rounded up the village’s 652 inhabitants and ordered everyone into the village square.

The men were then taken at gunpoint into nearby barns; the remaining 247 women and 205 children were herded into the church. The men were machine-gunned in the legs, then the barns and church were set alight. Those who tried to escape were shot. Only six villagers survived.

Among the SS men involved were 14 French nationals who claimed to have been forced to join the SS.

Afterwards the village was left in ruins as a permanent memorial to the brutality of France’s Nazi occupiers during the second world war. It was the biggest massacre of civilians committed by the Germans in France.

A new village was built nearby along with a memorial centre, dedicated in 1999 by the then president, Jacques Chirac, which is visited by about 300,000 people a year.

Robert Hébras, 95, was 19 at the time of the atrocity and is the last living survivor. He said he was angry but not surprised by the desecration.

“I have been foreseeing what happened for some time because today we tend to forget,” Hébras told French journalists.

“Many generations who come afterwards have a habit of wanting to scratch it all out … I know there are a huge number of revisionists and I’m surprised this hasn’t happened before. Shame on these people. The people who did this aren’t normal, or they’re hateful people who don’t want to accept the facts.”

Hébras added to Agence France-Presse: “At Oradour, we know what happened; how people were executed brutally and in cold blood. But what I fear is that everyone will talk about Oradour for 48 hours then stop and forget.”

In a statement released by the Élysée Palace, Macron said: “Everything will be done to ensure that the authors of this are brought to justice.” The president added that he “condemns this unspeakable act in the strongest terms”.

The prime minister, Jean Castex, joined MPs from across the political spectrum in condemning the attack. “I learn with anger and dismay the damage to the memorial centre. To violate this place of reflection is also to violate the memory of our martyrs,” Castex tweeted.

The interior minister, Gérald Darmanin, also tweeted: “The negationist inscriptions in Oradour-sur-Glane spit on the memory of our martyrs. The services of the ministry of the interior are at the disposal of the commune mayor to have the author of this abject smear arrested.”

The graffiti was covered with blue plastic on Sunday.

“That someone painted over the word ‘martyr’ and put ‘liar’ and the name of a [historical] revisionist in its place has shocked us,” said Philippe Lacroix, the mayor of Oradour.