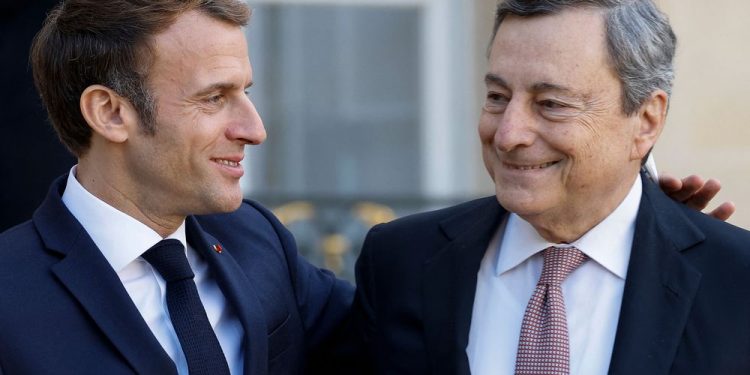 “The treaty marks an historic moment in relations between our two countries” Draghi told reporters after the meeting. “France and Italy are further consolidating our diplomatic, commercial, political and cultural ties.”

The 15-page document lays out a number of goals, including a pledge to reinforce military connections between the two countries, including on the industrial level, and to work together on enhancing Europe’s defence capabilities.

“The objective we are following is to have a stronger and more sovereign Europe”, Macron observed, citing the need for a “Europe that knows how to protect its borders and defend itself.”

The so-called Quirinale Treaty, named for the Roman residence of Italy’s president, was originally envisioned in 2017, but negotiations over the treaty ground down as a new, populist government came to power in Rome in 2018, which clashed with Macron over immigration.

As Draghi became new PM earlier this year, backed by a wide-tent coalition including nearly all the Italian parliamentary parties, Italy returned to more active cooperation with France. Draghi and Macron have worked closely to resolve diplomatic and security flashpoints, such as ending the years of conflict in Libya.

The Treaty will see Paris and Rome seek common ground ahead of EU summits, something France already does with Germany before crucial EU policy moves. The Franco-Italian agreement comes as German Chancellor Angela Merkel, long perceived as the informal leader of the EU, is about to bow out from politics, likely to be replaced by a more inward-facing government.

Signing the treaty, Macron emphasised that it will not challenge existing French relations with Germany, but will be complementary, with the aim of boosting all of Europe.