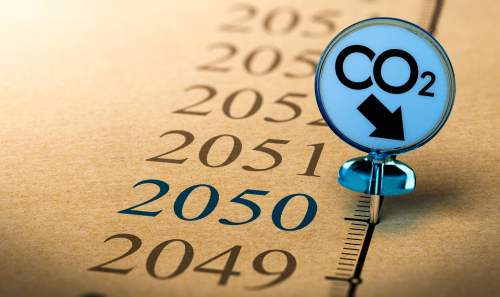 Special Pushpin with the text co2 pined on a timeline in front of the year 2050. Concept of climate plan and carbon dioxide reduction.

After French Minister of Environmental Transition Barbara Pompili announced the country would exceed the planned cut of 1.5%, Macron declared France had cut greenhouse gas emissions in 2019 by approximately 1.7%.

“We still have a long way to go but we are on track to respect our commitments,” Pompili said, noting “our efforts are paying off.” Grants for replacing oil boilers with gas or wood alternatives, which are cleaner, are beginning to yield results, she observed.

The French emissions monitoring agency CITEPA estimated in June last year that the country’s emissions in 2019 stood at 437 million tonnes of CO2 equivalent, representing an annual decline of approximately 1%.

On Sunday, the Ministry of Environmental Transition noted that CITEPA had revised its earlier estimate to 441 million tonnes, which represents a decline of 1.7% compared to the year before.

Greenpeace France head Jean-François Julliard dismissed Pompili’s claim as a PR exercise, insisting that “the reduction was also the result of the government having opted to increase the carbon budget in 2019.”

According to the Paris Agreement, France is to cut greenhouse gas emissions 40% by 2030 compared to 1990 levels and reach carbon neutrality by 2050. While these deadlines have not been breached, environmental NGOs like Greenpeace are accusing France of failing to adhere to the plan.

Earlier this month, a court in Paris ruled against France, finding the country negligent in its fight against climate change and concluding that the state was responsible for some ecological damage. Four NGOs brought the case before the court after an online petition gathered about 2.3 million signatures.

In November, the nation’s top administrative court gave the government a three- month ultimatum to present evidence of its work towards climate goals.

On Wednesday, the French parliament is to debate a new environmental bill that was drawn up by 150 randomly chosen citizens over a period of nine months. Some within the group are accusing the government of having watered down their proposed measures. Some MPs have expressed their dissatisfaction about new regulations being drawn up outside the parliament.