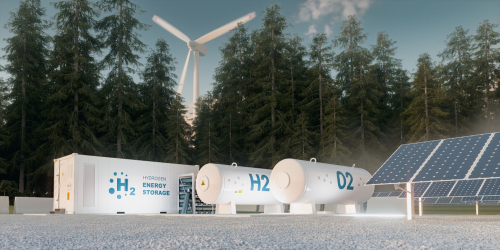 Brussels (Brussels Morning) France’s President Emmanuel Macron has unveiled a new five-year plan for developing the nation’s industry, aiming to become a world leader in green hydrogen by end of the decade, while also building a range of new, smaller nuclear reactors.

Presenting his government’s plan to business leaders and young entrepreneurs, Macron pledged to invest 30 billion euro to “re-industrialise” France. “We must wage the battle of innovation and industrialisation at the same time”, he declared.

The 30-billion plan envisions France constructing two mega-factories for the production of green hydrogen, a small modular nuclear reactor, designing a low-carbon aeroplane, and producing a large number of electric vehicles, all by the end of the decade.

Macron stressed that the goal is to “rebuild a framework” to ensure the “productive independence of France and Europe.” Other parts of the plan call for investment in semiconductor production and shoring up innovation in the French health sector, including biomedicine.

According to Macron, the plan includes a key role for small, agile startups, building France’s industrial future alongside existing corporate giants. Some of the impetus for this will come from the French public investment bank Bpifrance, which will invest 4 billion euro in startups, on top of the planned 30 billion euro spending.

With six months to go before the presidential elections, Macron’s political opponents have dismissed the plan as flagrant “campaigning”. Far-right National Rally leader Marine Le Pen accused the President of “committing French money to restore his electoral image with promises which only bind his successor.”

Greenpeace France director Jean-François Julliard called the plan a “festival of false solutions and wishful thinking”, warning that the problem lies in postponing the real energy transition, and predicting that France will “continue to produce as if the planet’s resources were unlimited.”