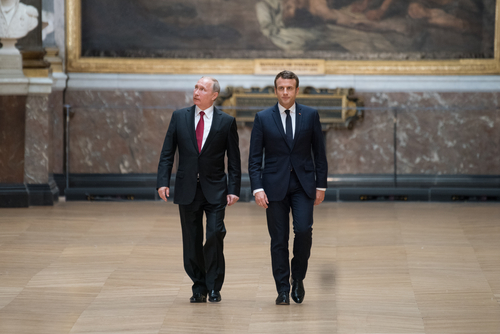 Belgium (Brussels Morning Newspaper) France’s President Emmanuel Macron arrived in Moscow today to meet with Russia’s President Vladimir Putin, in hopes that their meeting could defuse the ongoing tensions between Russia and the West over Ukraine.

According to French diplomats, Macron is set to seek commitments from Putin to de-escalate the current tensions with Ukraine, in an attempt to prevent a possible Russian invasion.

Ahead of the meeting, the Kremlin downplayed expectations, with spokesman Dmitry Peskov indicating that a significant change is likely not in the cards..

“The situation is too complex to expect decisive breakthroughs in the course of one meeting”, he said. Offering no details, Peskov noted that Moscow was aware of “certain ideas for lowering tensions” that Macron had shared with Putin during their earlier talks.

Russia has moved more than 100,000 combat-ready troops close to the Ukrainian border with Russia, as well as several units in the occupied Crimea peninsula and in Belarus, where Moscow claims its troops are participating in joint drills with Belarus forces. Western analysts warn that the troop movements could enable a full-scale invasion on a moment’s notice.

Putin, on the other hand, denies there are any plans for an invasion, but at the same time is demanding a series of concessions from NATO in exchange for removing the troops from the border and de-escalating tensions with Ukraine.

Today, Peskov said it was impossible to speak of a lull in tensions as long as Western governments continued to talk about a looming Russian invasion. He maintained that Moscow “had heard nothing new” in recent days about any of the security assurances it has sought. These include guarantees that Ukraine would never be admitted into NATO, and a withdrawal of NATO forces from many Eastern European countries. “Our Western interlocutors prefer not to mention this topic”, Peskov declared.