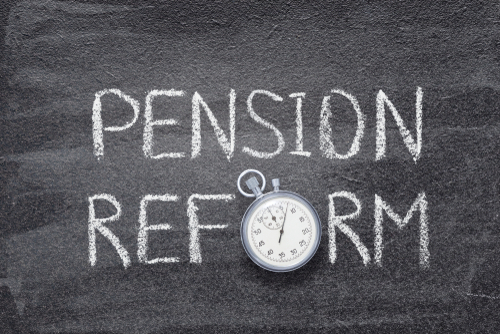 Brussels (Brussels Morning) France’s President Emmanuel Macron has declared that now is not the time to push ahead with the national pension system reform, blaming the fifth wave of coronavirus infections for the delay, which will most likely mean the proposed reforms will not arrive until after next year’s presidential elections.

Macron’s plans to reform the country’s expensive and complicated pension system were a key part of his 2017 election platform, but they failed to get off the ground after encountering furious resistance from the unions, which led to a wave of protests and transport strikes, just before the first wave of the coronavirus pandemic reached France.

Macron delayed the implementation of reforms, but pledged on 12 July this year that his government would resume work on the pension system rework as soon as the coronavirus situation is considered under control. On Tuesday, he said things were worsening again, and announced another delay.

“The conditions are not in place to re-launch this major project today… we will need to make clear decisions regarding the reform of the pension system from 2022 onwards”, he said.

While he has not yet officially announced that he plans to run for re-election, Macron’s critics continually accuse him of already running an election campaign, from his plans to reform the police, also now held up until after the election, to the latest delay of the pension system reform, which could likely hurt his ratings ahead of the spring elections next year.
Macron is currently ahead in the polls, and is also polling favourably against most possible second-round match-ups. He is all but guaranteed to enter the second round, where he would most likely face a far-right candidate, either anti-immigrant pundit Eric Zemmour, or the National Rally leader Marine Le Pen. Current polls have him beating both candidates, as well as the centre-right Republicans’ most likely candidate, Hauts-de-France regional leader, Xavier Bertrand.