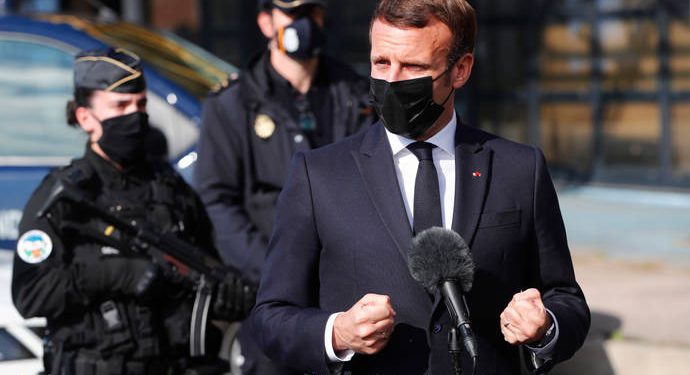 Brussels (Brussels Morning) France’s President Emmanuel Macron criticised US media over coverage of France’s stance on Islamic extremism in the wake of jihadist attacks, RFI reported today, Monday. Several US newspapers are “legitimising this violence and saying that the heart of the problem is that France is racist and Islamophobic,” Macron warned.

He pointed out how every nation in the world supported France when the country was attacked five years ago. Now, media from countries that, as he sees it, share France’s values, are taking a line that shows they have failed to understand secularism, one of the pillars of French policy and society. Macron pointed out that France “is as secular for Muslims as for Christians, Jews, Buddhists and all believers.”

Since a jihadist beheaded French teacher Samuel Paty last month, domestic support for the need for immigrants to adhere to French values is stronger than ever. As part of a lesson on freedom of thought and expression, Paty had shown his pupils caricatures of the prophet Muhammad. Paying tribute to Paty, Macron defended French secularism and its tradition of satire, stressing that France would not give up this right.

His defence of freedom of expression was criticised by Islamists across the Muslim world as well as by US media and international political allies, including the UN.

The New York Times noted that Macron criticised US media for their bias, obsession with racism and views on terrorism, among other issues. While the paper conceded that US media are used to shrugging off accusations of legitimising violence, it added that French Interior Minister Gérald Darmanin is “using the inflammatory language of the far right” in describing beheadings and other terrorist attacks as savage.

The paper asserted that Muslims, rather than Islamists, criticised Macron’s aggressive response to enforcement of Islamic blasphemy laws in France by jihadists.

Politico Europe deleted its op-ed article solicited from a sociologist after critics warned the article was engaging in victim blaming. The author of the article titled “The dangerous French religion of secularism” complained, pointing out that deletion of the article was censorship. Editor in Chief Stephen Brown said he apologised to the author for taking down the article while adding that the timing of the release was inappropriate. He noted it was the first time that Politico had taken down an opinion piece.

The Washington Post reported that “instead of fighting systemic racism, France wants to reform Islam.” The Associated Press deleted a tweet that claimed France incites anger.

Macron reminded that the US society used to be segregationist before adopting a multiculturalist model. He noted that the French model is universalist, rather than multiculturalist, pointing to the lack of prominence of identity politics in France. We do not obsess over race or religion in France, he said and added there was a lot of misunderstanding about European values, French in particular, among US journalists.