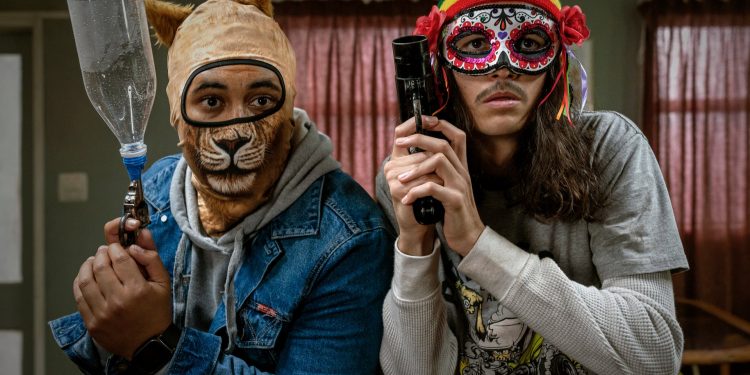 Director Paul Murphy’s Wellington-set crime comedy, Lowdown Dirty Criminals, seems to have fallen out of a time warp, feeling dated almost immediately. In the first scene the filmmaker deploys Guy Ritchie-esque freeze frames and kicks off a nonlinear Tarantino-like structure – which were particularly popular techniques for stories about gangsters and nogoodniks during the 90s and in the early years of the new century.

It opens with a young pea-brained protagonist, Freddy (James Rolleston), interrupting a Reservoir Dogs style face-off between gun-wielding criminals to commence his voiceover: “Have you ever had one of those days where everything just turns to shit?” Although this is only the opening scene, by this point Murphy has already established a laidback and perhaps even quintessentially New Zealand vibe, speaking directly and personably to the audience.

Before the film begins we see the words “for dad” and then “a film by Paul Murphy and heaps of others”, which doesn’t exactly suggest what follows will constitute gut-busting grit. The subsequent experience maintains a hang-loose and endearingly scrappy tone, with a cartoon menace befitting of a Cheech and Chong or Harold and Kumar movie.

The core challenge for Murphy and screenwriter David Brechin-Smith is to give the film just enough sense of danger that we accept the stakes for the protagonist are high, while never seriously inferring that he is capable of wicked deeds – even when brandishing a gun and assigned a mission to whack someone.

The experience hangs on the likability of Freddy, a pizza delivery man thrust into an assortment of comical situations he is neither prepared nor suited for. First of the inconsequential variety – dealing with cheapskates trying to scam a free feed – then the kind with more serious repercussions, after Freddy and his pal Marvin (Samuel Austin) draw the ire of criminal kingpin Mr Spiggs (Scott Wills). The pair approach the smooth-scalped gangster in the hope of earning more money and elevating their social status. He gives them an errand to pick up his birthday cake – and they botch the job badly.

To make it up to Spiggs, they are told they must kill a man who is sleeping with his wife – a borderline implausible assignment given these two likable chaps are obviously not cold-blooded killers, or even killers of any kind. The question becomes: what sort of hi-jinx will Freddy and Marvin get embroiled in and make a mess of? Their exploits, padded out with inane and humorous conversations, lead them to interactions with members of a rival criminal gang led by another kingpin: “The Upholsterer”.

This cat-stroking villain is played with snarling, hammy chutzpah by Rebecca Gibney, ramping up her badassery to cartoon levels and suggesting once again that, in a fight to the death with the likes of Liam Neeson, the Australian would come out on top. A scene with Gibney’s character slicing open the guts of a dead man, fishing through his obese belly with yellow gloves and pulling out various, erm, entanglements, epitomises the film at its most grotesquely trivial. Brechin-Smith occasionally resorts to juvenile gross-out humour, as if in the belief that he has exhausted all other options.

Rolleston, whose breakout performance was as the lead in Taika Waititi’s crowd-pleasing coming-of-age comedy Boy, is the film’s crucial performer and human highlight. Rolleston is not just a likeable presence; he seems to bend the tone of the entire film in his lowkey direction, giving it a hard-to-hate sincerity even when it is vulgar. Helped along by those well-worn Ritchie and Tarantino-isms, which allow a degree of playfulness, Lowdown Dirty Criminals has a synchronicity between the lead character and the very form and content of the film.

There are moments, such as a sizeable chunk of running time with Freddy situated underneath a bed, when you don’t even realise the film is being audacious, due to its unprepossessing vibes. Lowdown Dirty Criminals is a slight and derivative “in over their heads” story with a goofy charm; the sort of film in which an unexpected death leads to lines of dialogue like “we’re in deep shit now!”

Despite the inevitable return to that freeze frame moment at the beginning, which reiterates what we would have ascertained anyway (that the life of the protagonist is never seriously under threat), the film maintains an air of unpredictability gleamed from its scatty approach. And Freddy (thanks to Rolleston) is a solid lead: the kind of guy you want to sit on the couch and chew the fat with.