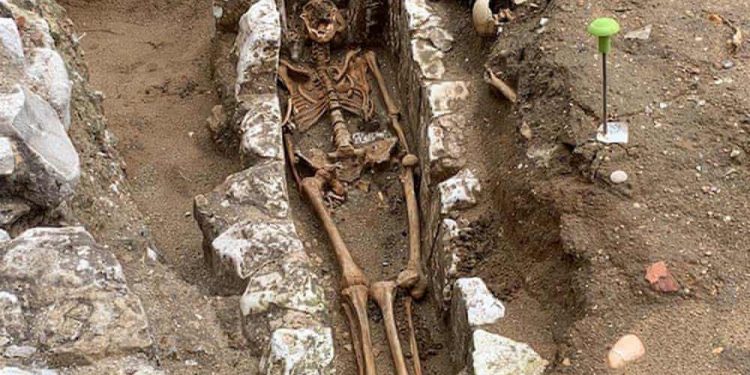 A lost medieval sacristy used by 13th-century monks has been uncovered in the grounds of Westminster Abbey along with the bones of hundreds, if not thousands, of buried bodies.

“You do have to be careful where you’re walking,” said archaeologist Chris Mayo, pointing to a fragment of skull poking out of the sandy soil. “You can see from the ground there are burials everywhere.”

Mayo has led a team working on one of the abbey’s biggest archaeological projects, one that has had the aim of uncovering the foundations of the Great Sacristy on its North Green, facing the busy Victoria Street.

The sacristy was built in the 1250s by Henry III during his reconstruction of the abbey that was built by Edward the Confessor.

It was the place where monks kept their vestments, altar linens, chalices and other sacred items used in mass.

Before that the site was used as a burial ground for monks, one of whom – still in remarkable condition – has been carefully and temporarily uncovered in his chalk-lined grave by the archaeological team.

The sacristy was repurposed as a domestic dwelling and in 1740, being in a perilous state, it was demolished.

It was later uncovered and recorded in 1869 in a project directed by the celebrated architect Sir George Gilbert Scott whose buildings include the Midland Grand Hotel at St Pancras station in London. At the time he was the Abbey’s Surveyor of the Fabric.

The team from Pre-Construct Archaeology has been working since January, with a three-month lockdown break, to understand the site better as part of a wider building project.

Authorities at the abbey want to construct a building on the site to house new welcoming, ticketing and security facilities, which they say will allow visitors to enter through the grand Great West Door, the entrance used by monarchs and royal brides but not the public.

To build on the site, the abbey wanted to fully understand the medieval footprint – hence the dig.

As the dig nears completion and before the site is covered, the Guardian was invited along to take a look. Mayo said the aim of fully exposing and recording the superstructure of the Great Sacristy had been achieved with the foundations clearly revealed.

Much had been learned and discovered with one significant find being a stoup, or basin, which was probably used by monks in Edward the Confessor’s church to wash their hands as they entered. It was found upturned and reused in the 13th-century foundations.

Other finds include a lead pipe, which would have supplied water to the monastery and probably dates from the 13th century.

Many fragments of medieval painted wall plaster have been found, suggesting the walls of the Great Sacristy were decorated with handpainted red, white and black flowers.

The team also found a large number of 18th-century domestic objects, including china plates, chamber pots, glass drinking vessels and an assortment of combs and brushes.

Not surprisingly given its past as a known burial ground before the sacristy and during the 18th century, lots of human remains have been discovered.

There must be “hundreds if not thousands”, Mayo said, adding “this will be the case right the way across the Abbey site. Ultimately the Abbey’s grounds once went much further still… this whole area was awash with burials. If you dug a hole underneath the supreme court you’d find a few burials as well.”

As with many archaeological digs there have also been moments of excitement, followed by juddering letdown.

A stacked grave was found leading to speculation that it could be some of the regicides, the men involved in the execution of Charles I whose bodies Charles II ordered to be taken from the abbey and thrown in a pit. Unfortunately the dates meant that was not possible.

The discovery of an impressive medieval sarcophagus also raised hopes that the team could have found the remains of someone in charge of the Great Sacristy.

“What we’ve found is that the individual has been taken out and the sarcophagus has been re-used as a drain,” said a disappointed Mayo. “It does take some of the gloss off.”