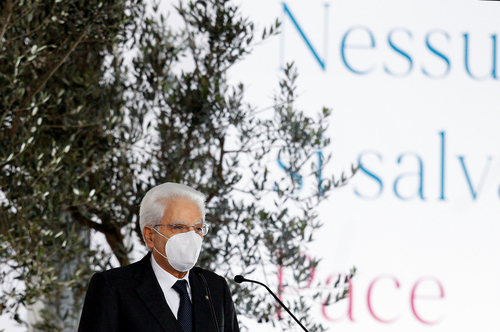 Mattarella hopes to end the government crisis and avoid snap elections by bringing in a non-partisan expert with a proven track record in economic matters at a time when Italy is facing a new wave of coronavirus infections and the accompanying economic slump. Even though Draghi seems to enjoy wider support among parliamentary parties than outgoing Prime Minister Giuseppe Conte, tense relations between left- and right-bloc parties could put securing a majority out of reach.

Conte, himself a non-partisan expert who was endorsed by the populist 5 Stars Movement (M5S), was forced to resign last week after former Prime Minister Matteo Renzi withdrew his minor Italia Viva (IV) party from the ruling coalition. Renzi, who clashed with Conte on the use of EU coronavirus aid funds, was the first to openly float the idea of Draghi as PM.

The centre-left Democratic Party (PD) and its junior partner LeU, both of which backed the Conte government, could also stand behind Draghi, ANSA reported. However, the anti-establishment M5S faces a difficult choice in the former banker.

M5S’ former leader and outgoing Foreign Minister Luigi Di Maio tried to keep the doors open for the party to back Draghi on Thursday. “In my opinion, the 5 Stars Movement has the duty to meet him, listen and then take a position,” Reuters reported him as saying. “It is precisely in these circumstances that a political force shows itself to be mature in the eyes of the country.”

Still, a number of M5S MPs could remain opposed to a technocrat government such as Draghi has promised, and the issue might even cause a rift within the party.

Draghi has some options on the right wing of Italian politics as well, with former PM Silvio Berlusconi’s party Forza Italia (FI) appearing ready to cooperate with him. The smallest party in the right wing bloc, the far-right Brothers of Italy, however, is resolute that the only acceptable option is snap elections.

League, the largest right-wing party, which currently tops the polls and stands to profit most from early elections, might also support Draghi. However, League leader Matteo Salvini noted that his support would have to be conditional based on assurances of early elections being held at a convenient moment. Salvini also made clear he would not support a government of which M5S is a part.