London steps on the brakes as Europe roars forwards

by Pietro Moro
in Economy, Features 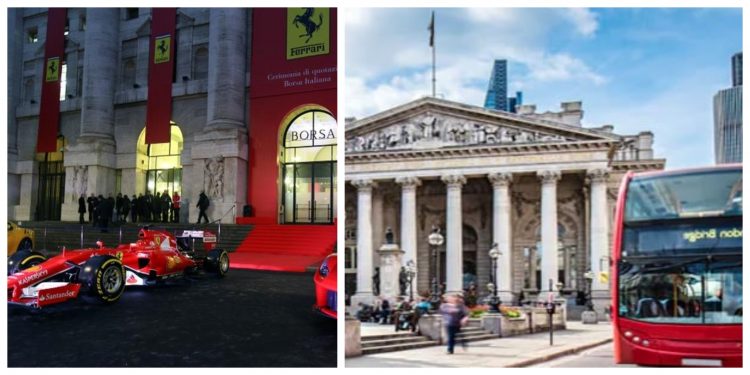 The Hague (Brussels Morning) Stock exchanges are the racing circuits upon which our economies compete in a global Grand Prix. Capital accelerates or decelerates growth, inflation, debt, keeping an economy on track. With Brexit looming, the London Stock Exchange (L.S.E) is selling off its Italian assets to Euronext. And in Europe’s capital markets, Paris and Frankfurt are once again in pole position with finely tuned new engine revving to go.

To date, the L.S.E is one of the six global rated financial racing circuits in the world. Their combined revenues account for 56% of the industry’s total revenue. But as the UK veers off the European track, it will have to shed some of the best cars in its team, starting with Italy.

The selling the Italian Stock Exchange is a major development, both for the L.S.E and continental financial markets. Euronext reclaims for the continent the power of the EU’s third biggest economy, gaining ownership of a clearing house with critical mass, scope to for international growth and much-needed scale to lessen the divide between itself and its neighbouring competitors, Deutsche Börse and the L.S.E.

Italy maintains critical decision-making affecting its financial markets within the Union. But Euronext has all the makings of a European champion, creating the financial equivalent of Airbus.

The emerging behemoth, along with Deutsche Börse, will be clearing a cumulative 47.5% of Europe’s repo market (Figure 1). Italy’s 149,5% Debt-to-GDP ratio gives the Italian platform a commanding pole position (as of June 2020), allowing the financial vehicle to go full throttle rather than be held back by London’s ambiguity towards the continent.

While British financial institutions lose direct access to the Single Market, France, Germany, and Italy are putting their oomph behind a single European winning team. European Commission and Court of Justice permitting, the consolidation of financial platforms in Europe could give rise to a world class stock exchange that will compete in every market.

In any given movie on stock exchanges, the eye is drawn to the trader as the hero or villain of the day, likening the market to an epic race. In truth, trading accounts for 10% of what a stock exchange actually does. For the L.S.E, it is post trade services that bring in a whopping 36% of revenue.

Financial markets are complex machines, upon which economies ride, strive, and drive. The performance of these sophisticated engines depends on many factors, including market data, investment decisions, financial products, trading platforms, and post-trading activities such as clearing.

The L.S.E acquisitions, combined with its Italian holdings, raised concerns in Berlaymont regarding the dominant position of a non-EU institution in European bond trading and clearing activities. In order to comply with the European Commission’s regulatory demand, London has agreed to sell its Italian assets, that is, MTS and the entire Borsa Italiana.

There were two lead bidders. One is Euronext, a conglomeration of European stock exchanges based in France, operating markets in Amsterdam, Brussels, Lisbon, Dublin, Oslo, and Paris. The second is the German Deutsche Börse, another member of the global-six.

Euronext, lacking a clearing house and strong market data service, was confined to the position of a mid-size car, no more than a regional player. Especially when Deutsche Börse Group owns Europe’s largest derivates market, Eurex, and Clearstream, the world’s largest ICSD (securities) clearing house. On the opposite side of the channel, the L.S.E owns LCH, another global top clearer. Clearly performance vehicles with bigger cylinders.

Given their operations and market shares, the Commission’s concerns, and L.S.E’s reasonable self-interest in not strengthening a fellow global competitor, Euronext prevailed with little surprise.

Why focus on clearing houses?

The strategic importance of clearing houses cannot be underestimated. They are the ignition switches that turn on the engine power.

Clearers become crucial during financial crises. They decide which sovereign bonds are deemed good as collateral, and which are not. In essence, they help determine whether banks thrive and propel economies in terms of speed and growth.

In every crisis, the repo markets are critical since banks use their assets to seek short-term financing to go through the difficult curve. This is where each country tests its tenacity and resilience as a financial engine, able to stay on the road and remain in the race.

Naturally, when the road ahead is slippery – as in a crisis – clearing houses need reliable collateral to keep their economies on the track, offloading the weight of unreliable sovereign or corporate bonds.

In Europe, nearly half of repo trades are secured with national debt. The most popular of these assets being German, British, and Italian. Clearing houses played a key role in the sovereign-bank nexus that underpinned Europe’s last financial crisis. It goes without saying, governments are keen to keep them on a regulatory leash and, therefore, keep them in the EU.

In the race to buy up Italian horsepower, Paris is ahead of its Frankfurt-based competitor (Figure 1). But the most significant development is that Europe now enters the global Grand Prix of capital markets.

With the loss of London, Europe needs a globally competitive race team within the EU. In 2012, the European Commission prevented the merger of Paris and Frankfurt to form a continental champion. But in a post-Brexit environment, the calculus has changed. Europe will need a market-leader that can roar ahead.