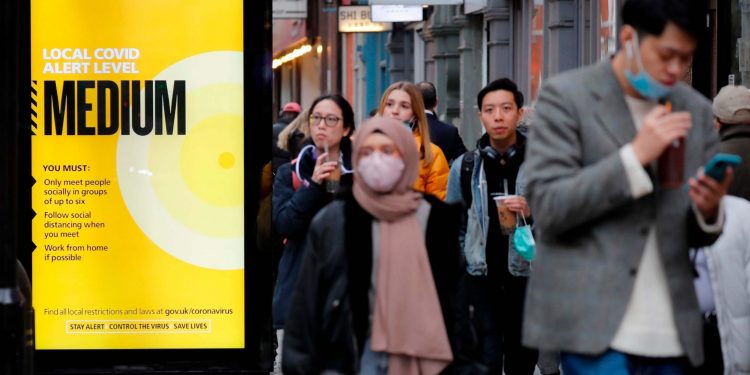 London (Brussels Morning) London, one of the world’s financial capitals, is to enter a period of tough restrictions as it will move into a higher risk category under the government’s new tiered system.

Essex, York, Elmbridge in Surrey, Barrow in Furness in Cumbria, North East Derbyshire, Chesterfield, and Erewash in Derbyshire will also join the capital as Tier 2 areas from midnight on Friday.

The new measures mean inter-household mixing will be banned indoors and in pubs and restaurants.

“Now, I know that these measures are not easy but I also know that they are vital”, said Health Secretary Matt Hancock, speaking in parliament, calling the current decisions “some of the most difficult choices any government has to make in peacetime”.

Under the new three-tier system, areas will be categorised according to coronavirus infection rates. Tier 1 is a medium alert category, tier 2 is a high alert tag, and tier 3 is very high.

The Liverpool City area is the only region currently on tier 3, but moving Great Manchester onto the highest level is now under consideration.

There have been 600,000 confirmed cases of COVID-19 in the UK, while the death toll has exceeded 40,000, the highest in Europe. Over a million people have died across the world.

Boris Johnson’s government has come under fire for its response to the pandemic, critics saying it was too slow to respond, resulting in many unnecessary deaths in care homes.

Recently leaked documents also suggest the government did not heed its medical experts’ advice suggesting a two-week “circuit-breaker” was required to curb the virus.

The National Health Service’s (NHS) testing and tracing programme has also been criticised for experiencing too many hiccups.

The economic forecast facing Britain is stark, with unemployment figures already at a three-year high. Louise Casey, a former government adviser on homelessness, warned the country was facing a “period of destitution” in which some families “can’t put shoes on” children.

Talking to the BBC, Casey said Downing street’s attitude was people will make do, adding, “Well, they weren’t coping before COVID”.