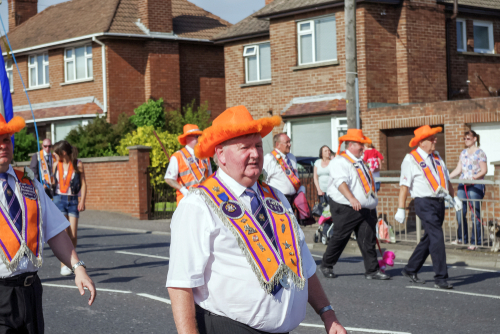 Brexit and subsequent dealings have, as predicted, created a new slew of issues in Northern Ireland. As the NI protocol begins to take shape, identity politics have been rebuilt and tensions are rising.

Madrid (Brussels Morning) July 12th has come and gone this week, but it is hardly just another day in Northern Ireland, it marks the height of the unionist marching season. While each year international news coverage is ramped up, much of the hubbub surrounding the events covers the potential of skirmishes rather than incidents. This year, the stakes have seemed arguably higher with the roll out of post-Brexit trade and the subsequent Northern Ireland Protocol.

To the Ulster community, July 12th is a day of celebration and jubilee. The day of the Orangemen is the celebration of the date that King William of Orange took control from the Catholic King James II at the Battle of The Boyne in 1690. It marked a shift to a protestant line of succession to the British Crown. While some celebrate, others choose to stay inside, namely the Nationalist community, who see themselves as Irish, rather than subjects of the Crown. It’s a stark reminder of the identity politics that persist within the fragile peace of Northern Ireland.

While the international community watch on edge for signs of conflict, Professor of Politics at Birkbeck College, University of London, Eric Kaufmann explained quite plainly, the current frustrations of the unionist community will probably not result in disturbances across the communities. Kauffman is a longtime researcher of Orangeism and the author of multiple books on the subject. He tells Brussels Morning, “The July 12th parades no longer produce the kind of inter-communal clashes they did before the cessation of the Drumcree parade route standoff in 2001. While there are Unionist grievances over the new customs checks between Northern Ireland and mainland Britain, these are unlikely to produce inter-communal tensions because Nationalist actors are not viewed as the source of the new policies.”

As an outsider looking in, the recent unrest seems clearly marked by the current economic and trade difficulties arising from the Brexit implementation. Chaos ensued upon the re-creation of the border separating the UK from the European Union, and subsequently creating a necessity of division between the two pieces of the isle of Ireland, whether it be by land or sea.

The history that exists there warrants great consideration, a step arguably understood by previous Prime Minister Theresa May, the support of the EU for the Irish backstop being part of her demise, but not so much by Boris Johnson. His approach to Northern Ireland arguably lacked the necessary nuance to satisfy the needs of the complex peace derived from the Good Friday Agreement. Instead, offering an ‘act now, figure it out later’ methodology, which is proving inefficient and alienating. Former Director of the World Trade Organization and President Emeritus of the Jacques Delors Institute, Pascal Lamy, states in simplicity “The discovery of consequences of putting a border are now appearing which is what you call the real world. Brexit is now a reality in the real world, where there is a real border and there are real controls. And that’s inevitable.”

Speaking with Quintin Oliver, head of Stratagem International, and responsible for the non-sectarian “Yes” campaign for the Good Friday/ Belfast Agreement Referendum, we discussed misconceptions of Northern Ireland. He states that as Northern Ireland is a society in conflict, the assumption that the Ulster unrest witnessed in 2021 has been completely economic is to see the current state of affairs through the wrong lens. “Where a contest with identity exists, identity will always trump economic concerns.” Oliver predicted back in June 2016 that the Brexit result, whichever direction it went, would be cataclysmic for Northern Ireland, and he says his fears have come to fruition.

“Brexit has shattered what peace there has been, principally by deepening political divisions again, after the past 23 years following the Good Friday Agreement (meant) a shift away from strict identity politics.”

“My concern with the Protocol is the failure of the British government to implement it and acting in bad faith in pretending they did not know its content when they proposed and negotiated it with the EU.

The decision to remove customs and veterinary officials from the Port of Larne in February was political. It was not based on any real assessment of threat but was an attempt by the Democratic Unionist Party to raise tension and cause worry to workers.

It is totally irresponsible for the British government and the DUP to talk up the threat of violence and to consistently give credibility to the views of violent criminal gangs for political purposes.

The fact of the matter is that there is no spontaneous violence on account of the Protocol. Any unrest is deliberately orchestrated to try to secure political objectives.”

The NI protocol was ruled lawful in June 2021 after being challenged by Unionist politicians, including Arlene Foster. The deal was negotiated by UK Brexit Minister Lord Frost and was proposed by EU counterparts. It ensures Northern Ireland remains in the EU single market for goods, which is favourable to the GFA. However, it has alienated the Ulster community as the border has been placed in the Irish Sea, effectively separating the unionists from the United Kingdom, and creating issues in food flow, among other things, with new checks. Lord Frost, in an op-ed for Financial Times placed blame for recent mishaps not on his own negotiations, but because his European Union counterparts are not being agreeable to further UK proposals.

While paperwork is now inevitable, as in any region where goods must cross borders and enter different markets, the UK could arguably calm matters, simply by keeping in line with EU standards. Lamy responds that “It’s ultimately the decision of the UK to create either a thick or thin border. While the trade deal has already been made, the choice for cooperation at the border through less divergence of EU regulation will ensure a thinner border.”

While the discussion seems to be about the “Sausage Wars” and Lord Frost has perpetuated this narrative, the people living there are stuck with the real consequences.

It seems many farmers and producers are content enough with the functioning of the Protocol, and as Pat Sheehan of Sinn Fein asked Frost as reported by Politico, “if people can’t get Cumberland sausages here, they’ll certainly be able to get local sausages. That’s good for local business here. Would you not agree with me?”

Ultimately the UK unilaterally decided to push back the deadline for full enactment of the trade deal, and asked again in June for the EU to extend the grace period through September. While Frost has continually said the UK has no plans to submit to EU regulation, Irish foreign Minister Simon Coveney has been quoted saying that 80% of checks could be reduced if the UK were willing to agree to a common approach to standards for veterinary practices, and sanitary and phytosanitary standards on food.

Concerns that the British won’t make good on their promises have made those involved in the dealings nervous. MacManus comments “As an MEP from the largest party in Ireland, I am concerned that the British government seems to be pathologically incapable of respecting agreements – the Protocol, as well as the Good Friday Agreement and subsequent agreements with the Irish government and parties in the North.”

The Belfast (Good Friday) Agreement remains an essential document to preserving peace, but at the same time when I ask if it’s in jeopardy, I am reminded by Oliver that this isn’t quite the right question to ask. “It isn’t a single thing that can come tumbling down, it’s been written nearly twenty five years ago and still many parts have not been implemented, but things will not go back to 1997, you can’t take everyone back to prison or put guns back in the hands of the paramilitary.”

Change is a constant

Things have changed, and should continue to change. While many hold on to deep rooted identities and beliefs, there are a growing number of independents in NI as well.

Oliver mentions that roughly one third of the population now sit in the middle, and the power sharing agreed upon in the GFA makes representation of this group and their votes a smaller share. He notes that this middle is a group to watch as well; they are undecided on the issue of any future border poll and would be “arithmetically critical” in whichever direction they go.

As matters remain tense, and British and Unionist political leaders continue to stir up discontentment, it becomes clear that riots in April and larger than ever bonfires this past week are a symptom of what Quintin Oliver calls “Protestant Unionist alienation.”

With poor political leadership and groups like the Loyalist Communities Council who say they represent the terrorist groups including the UDA, UVF, and Red Hand Commandoes making threatening statements to Irish Politicians, it’s no wonder there’s tension.

Macmanus spoke on the LCC, stating,

“The LCC have no political mandate to speak on behalf of anybody, much less to threaten members of the Irish government or to seek to overturn the referendum result – north and south – that brought the GFA into effect. Instead of meeting with the LCC and giving them credibility, the authorities should be closing down their criminal activities.”

Stronger leadership that doesn’t resort back to the us versus them politics of old is arguably best for the unionist community. The bonfires as explained by Oliver are a form of “no surrender” and a reminder they still want to be heard. The constant pushback and poor leadership brings a sense of abandonment which is shaping up to be exactly the crisis everyone had hoped to avoid. Brexit was never going to be simple for Northern Ireland and if the UK doesn’t make concessions to ease tensions it will remain a long road ahead.