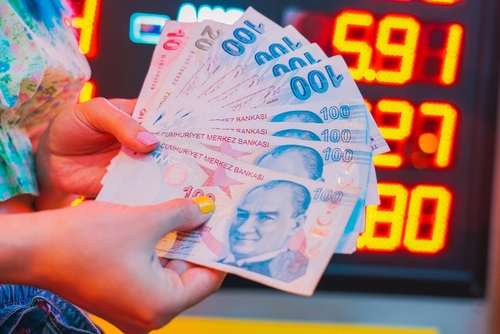 Brussels (Brussels Morning) The Turkish lira continues to fall as the country maintains its expansive monetary policy, with annual rate of inflation above 20%.

Economists have warned that maintaining its expansive policy could push inflation past 30% in the coming months.

“As a Muslim, I will continue doing what our religion tells us”, Erdoğan declared — “this is the command.”

The lira dropped to roughly 18.4 per US dollar on Monday, a slump of about 11%, before recovering later in the day to stand at 14.9.

Erdoğan at odds with economists

Erdoğan insists that the expansive policy he favours will increase exports. However, economists advise against the move and note that more conservative policies are required if the soaring inflation is to be effectively reined in.

According to Islamic law, charging interest on loans is usury and therefore fornidden. This was not the first time that Erdoğan has invoked religion as a guiding principle for making monetary decisions.

Announcing an “economic war of independence” last month, he stressed that Turkey needs to be less reliant on foreign direct investments and imports of natural gas and oil to fuel its economy.

“The policy choices implemented here are not only creating new economic problems for businesses, but for all of our citizens”, TÜSİAD warned. “It is urgent that we assess the damage that has been done to the economy, and quickly return to the implementation of established economic principles, within the framework of a free market economy.”

Erdoğan responded after a Cabinet meeting, accusing the association of “scheming to topple the government” and warning it, “do not hold out your hopes in vain.”As result of depreciation of the lira, shoppers from the Balkans have been flocking to Turkey to stock up on goods, drawn by prices significantly below those in some of Europe’s poorest countries.

Tags: Main-SliderTurkish lira continues to fall as the country maintains its expansive
No Result
View All Result