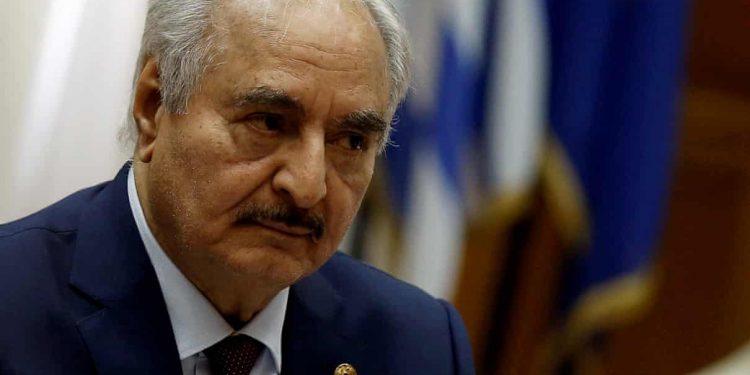 A $50m damages claim lodged in a court in Virginia alleges that the Libyan warlord General Khalifa Haftar, who holds US citizenship, is guilty of war crimes including starvation sieges that forced families to eat grass and tree bark to survive.

The claim against Haftar by two relatives of his alleged victims is an attempt to make him answerable somewhere for the crimes he is accused of perpetrating as head of the Libyan National Army, the major military force in the east of the country, which since 2014 has been in conflict with the Tripoli-based government in the west.

The claim, focusing on the siege of Benghazi in 2016-17, is being supported by the high-profile lawyers Mark Zaid, who represented the US administration whistleblower who sparked the Trump impeachment, and Matthew Jury, a British solicitor who has represented families seeking compensation from the era of the former Libyan dictator Muammar Gaddafi.

With no functioning independent courts in Libya, and the international criminal court unwilling to file charges against Haftar, Jury said it was legitimate for victims of Haftar’s cruelty to file claims in Virginia, where Haftar and two of his sons, Saddam and Khalid, own property.

Haftar lived in Virginia after he fell out with Gaddafi in 1987. His family is said to own 17 properties in Virginia, including an 85-acre estate.

US courts have a practice of accepting civil claims by US citizens seeking compensation for acts of terrorism by foreign powers. Sudan recently agreed to set up a $335m compensation fund for families who lost relatives after Sudan provided help to al-Qaida militants to mount attacks in Kenya.

The Torture Victim Protection Act of 1991, however, allows for the filing of civil suits in US courts by non-US citizens against individuals who, acting in an official capacity for any foreign nation, have allegedly committed torture or extrajudicial killing.

The claim filed on Wednesday has been brought by Ali Hamza, now a Canadian citizen, and Salimah Jibreel, both survivors of the LNA’s siege of Benghazi in 2016, and who allege Haftar is responsible for the death of several of their family members. Haftar is accused in the claim of “committing or presiding over acts of torture, extrajudicial killings, cruel and degrading treatment and imprisonment”.

Hamza says he had to flee his home in Benghazi after it was bombarded and looted. His wife, Aalya, his two brothers, Ibrahim and Naser, and his three sisters, Fariha, Faiza, and Abtisam, took shelter in an unoccupied apartment in the suburb of Ganfouda, where they ate bark and grass and drank water from puddles to survive.

The case states the Hamza family members became so weak that they could barely walk, and there was repeated artillery and aerial bombing attacks all around them. The combination of dust from the bombing attacks and starvation caused them to experience temporary blindness.

Some family members were eventually killed in a tank shell attack at the end of February 2017, and others were killed when they tried to flee in March. One captured daughter alleges she was tortured.

In the other case, Jibreel claims she saw her three-year-old daughter Aziza, eight-year-old daughter Maryam and 11-year-old son Mohammad killed on 18 March 2017 when a shell hit their house. Her sole surviving daughter was injured, as was her husband, Alaa, who has been detained by LNA forces without charges and is still being held incommunicado in detention.

Haftar initially tried to ignore the cases but, faced with the possibility of a default judgment, he has hired lawyers to defend himself, including by claiming he is immune from prosecution since he should be treated as a head of state. The claim against him says he is not a head of state but subordinate to the Libyan House of Representatives, and cannot claim sovereign immunity.

“At all relevant times, defendant Haftar knew or reasonably should have known of the pattern and practice of gross human rights abuses perpetrated against the civilian population by subordinates under his command,” the claim states.

Human rights groups allege war crimes have been committed on both sides in Libya’s on-off civil war, including by mercenaries hired by foreign powers, but some of the most documented abuses are alleged to be by Haftar’s LNA.

Despite the allegations against him, Haftar has often been allowed to meet European leaders, including the French president, Emmanuel Macron. However, Haftar’s grip on politics in the east may be weakening as he faces the consequences of a failed year-long siege of Tripoli.