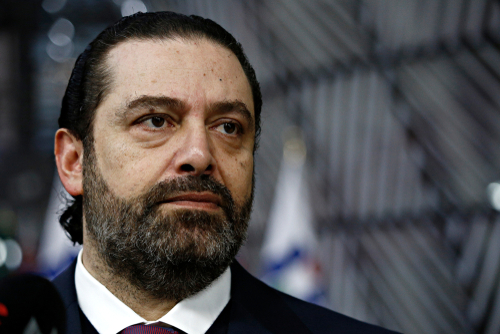 Brussels, Belgium. 14th March 2019. Lebanon's Prime Minister Saad Hariri arrives to attend in international conference on the future of Syria and the region.

Brussels (Brussels Morning) Lebanon’s Prime Minister-designate, Saad Hariri, announced on Thursday that he is giving up his attempt to form a government, a move that serves to exacerbate the ongoing government crisis amidst rapidly deteriorating economic conditions.

Harriri blamed President Michel Aoun for his decision, claiming he was unable to reach an agreement with the head of state on the composition of the future cabinet. According to Harriri, Aoun wanted to hold a blocking minority in the government, which would have prevented him from running the country.

Aoun hit back, stating that Harriri refused to discuss any changes, insisting on the line-up the PM-designate proposed without any desire for compromise. The President will now hold a new round of consultations with lawmakers in an effort to designate a new Prime Minister as soon as possible.

Nearly a year has passed since the devastating explosion that shook the capital of Beirut in August, levelling several districts in the city, killing more than 200 people and leaving around 300,000 people homeless.

Prime Minister Hassan Diab resigned in the aftermath of the blast, though he has remained in the caretaker role, given that Lebanon’s politicians have proved unable to form and confirm a replacement government ever since.

The country’s economy is in freefall, with the Lebanese pound spiraling into uncontrolled inflation, with dollars trading on the black market for more than 21,000 pounds per dollar – a more than ten-fold increase over the official exchange rate.
The French Foreign Ministry and the US State Department expressed grave concerns about the latest developments, just days after the EU announced it would prepare sanctions against Lebanon’s ruling class for delaying the establishment of a new government, at a time when graft and misuse of public funds remain rampant.