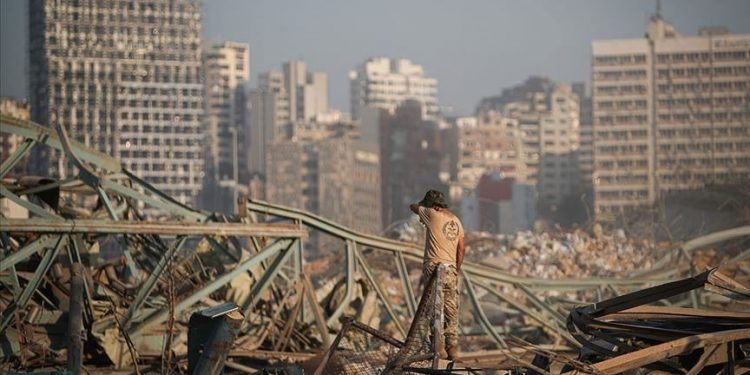 A military judge in Beirut will, on 17 August, start examining a report into the cataclysmic explosion that levelled parts of the city 12 days ago, and determine who might face charges. A day later, five thousand miles away in The Hague, an international tribunal is due to hand down a verdict into a blast that took place 15 years earlier, killing the country’s former prime minister, Rafik Hariri and unleashing a generation of havoc, from which it is yet to recover.

The tales behind the two explosions are the most important events in the modern history of Lebanon. The 2005 assassination of a leader credited by many with leading a broken nation from the rubble of war had remained a searing wound, while the annihilation of much of Beirut on 4 August has left gaping new scars on the country’s psyche.

Both are converging into moments of reckoning that will define whether a functioning state can ever emerge. “This is really it,” said Tamara Nawfal, an expatriate Lebanese woman, living in Sydney, Australia. “It’s not just the STL (Special Tribunal for Lebanon) verdict (on Hariri’s alleged assassins). It’s what this judge does with the blast. The diaspora is watching. Give us a reason to come home.”

Before Judge Fadi Sawan, who was named on Friday as the ultimate arbiter of how the port explosion happened, are the names of bureaucrats empowered to make decisions at Beirut’s port in the six years that 2,750 tons of Ammonium Nitrate had been stored in a dockside hangar. A total of 25 employees have been named, all of whom held roles in one of the country’s most sensitive sites, under the eyes of senior politicians, who held prominent stakes in what gets into the port, and how.

In the Lebanese court of opinion, politicians are the ultimate culprits. Anyone beneath the layer of leaders who have pillaged the country’s wealth and used its institutions – including the port – to do so, is a cog in a much bigger and more consequential wheel.

“Show me a Customs officer who kept all those explosives near the main highway, and I’ll show you the hidden Imam,” said Khaled, a cafe worker in West Beirut. “When we say ‘all of them means all of them’, we mean it.”

The call for accountability has been a familiar refrain through months of demonstrations that have targeted the Lebanese political class as the country’s economy disintegrated. The onset earlier this year of the coronavirus, and it’s raging resurgence now, as well as the impact of one of the world’s biggest industrial accidents, have amplified demands. But with diggers still churning through the explosion site, there is little evidence so far that how politics is done in Lebanon is likely to be overhauled.

Once seen as a watershed decision, the STL verdict, which is likely to implicate four members of Hezbollah in the Hariri assassination, is no longer seen as likely to have the same impact. Holding anyone to account for politically sensitive crimes, including more than a dozen assassinations since 2004, has been beyond the will of Lebanese authorities, and when it was convened in 2013, the Tribunal was seen as a breakthrough, where evidence could be clinically examined in a non partial arena.

The Tribunal initially rattled Hezbollah, who mounted an intensive campaign to discredit the process and it’s funding. “We do not feel concerned by the STL’s decisions,” Hezbollah leader Hassan Nasrallah said in a televised address on Friday night. “For us it will be as if no decision was ever announced. If our brothers are unjustly sentenced, as we expect, we will maintain their innocence.”

The passage of time has also diluted the tribunal’s impetus. Nevertheless, some in Lebanon see the verdict making a mark, both here and internationally.

“The main implication of a guilty verdict would be increasing pressure on Hezbollah,” said Mohaned Hage Ali, the Communications Director of the Carnegie Middle East Centre. “A verdict would be part of the complete narrative of how the crime was committed. So this will definitely be used against the organisation to incriminate and condemn it. Politically speaking it’s quite difficult to see how this might change things for them on the local scene. It will, however, alter the discourse about Hezbollah, and relations with the outside world.

“It’s the first time we see a full judicial process in one of the major atrocities in recent decades. It’s a step in the right direction towards building more accountability and justice. A verdict in this case would be a useful stepping stone.”

There is, however, less trust that the port investigation has either the mandate, or the will to uncover what led to one of the biggest industrial accidents in world history.

“I doubt the Lebanese judiciary can deliver an independent investigation and this is an opinion shared across the political class,” said Hage Ali. “Never in the history of our judiciary have we seen a crime investigated of this proportion. Major assassinations and disappearances over the decades have all gone unresolved. I don’t see how this court will be different. The reason is obvious: this judiciary is riddled with appointees who owe their loyalties to the political class, which is to be condemned in any proper investigation into the port.”

As the probe gets underway, many of those picking up the pieces of east and central Beirut are asking their own questions. So too are television anchors who – fed by aggrieved officials – are laying down precise and well-researched themes that would be the focus of any investigation.

Among them are the disjointed – and ultimately aborted journey of the Russian freighter, the Rhosus, which was bound for Mozambique from Georgia, but ended up in Beirut after an unscheduled diversion to Greece. “How did that happen,” asked one well connected maritime expert in Beirut. “It doesn’t look right.”

Other pressing issues are who ended up being the beneficial owner of the nitrate, who paid for the six years of storage, was the Georgian company who sent the stockpile paid, and if so by whom? And – most importantly for many Lebanese – who gave the political cover for it to stay there?

“Solve even a few of them,” and the Lebanese judiciary has started to do it’s job, said Fadi Hussein, a former port worker. “Limit the probe to scapegoats, and the country will sink just like the ship itself, which sits on the bottom of the Beirut harbour.”