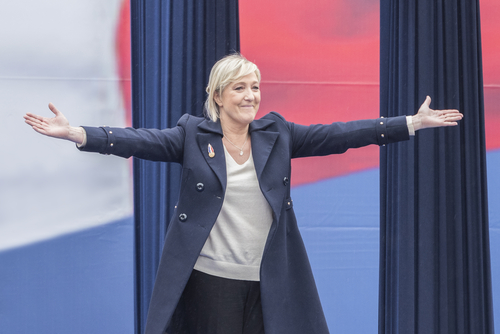 Giving a keynote address later in the day, Le Pen rejected criticisms that blamed the latest electoral results on the party`s shift towards the political center and away from extreme right-wing politics. These far-right politics ultimately cost Le Pen`s 2017 presidential election runoff defeat to Emmanuel Macron.
Indirectly confronting her more radical critics within the party, Le Pen said that the National Rally had experienced “a healthy change”, as she pledged that the party would not go back to the “old school” National Front, as the party was previously called.

Seeking to secure a rematch with Macron in next year’s presidential elections, Le Pen did away with the more extreme positions of her party, her aim being to widen its potential voter base and improve her odds in an expected showdown with the centrist incumbent president in 2022.

Her strategy, however, failed to produce results in the regional elections. The RN failed to win a single French region, losing ground to the traditional center-right Republicans, who seem to have bounced back from their historic slump at the 2017 election.

Le Pen’s personal popularity peaked ahead of the regional elections, overtaking Macron, giving RN and its leader high hopes that winning a region or two would provide them with a reinvigorated impetus for the coming presidential elections.

Instead, the elections produced a new centre-right contender, likely Republicans’ candidate Xavier Bertrand, who surged upwards in the polls after defeating the far-right by more than 25 points in the north of the country.

Bertrand’s success, and his current third place in the polls behind Macron and Le Pen, emboldened Le Pen’s critics in the party to speak out against the move towards the centre, since the strategy seemed for have been counterproductive both or the party and its leader.