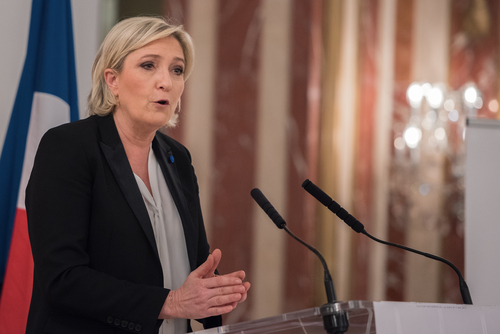 PARIS, FRANCE - MARCH 2, 2017: Marine Le Pen, president of the National Front a national-conservative political party in France in presidential conference about What role for the State in the economy.

Brussels (Brussels Morning) The French far-right failed to win a single region in France’s regional election runoffs, which saw a record low turnout and the return of most active voters to centre-right and centre-left options.

The elections also sounded a serious warning to French President Emmanuel Macron. His Republic on the Move (LREM) party similarly failed to win a single region, an indication that the movement he leads has failed to gain a foothold at the local level since he came to power in 2017.

The far-right National Rally (RN) and its leader Marine Le Pen were thwarted in the southern region of Provence-Alpes-Cote d’Azur (PACA), despite it being rated as the party’s best shot at attaining power at the local level. Ultimately, RN was kept out by an alliance of centrist parties uniting in what they called dubbed a “republican front”.

Le Pen, who hopes for a rematch against Macron in next year’s presidential elections, blamed the poor voter turnout and what she described as the “unnatural alliances” put together by her opponents. A voter turnout of 35% attested to the fact that nearly two-thirds of registered voters ignored Sunday’s runoff elections.

The regional government is in charge of promoting economic development, managing transport and organising secondary education for minors. The fact that most voters reportedly feel little or no affinity with their regional administrations is deemed one of the key reasons for the low turnout. Another, more worrying reason is that many French citizens have become apathetic about politics, having lost faith in the politicians and having grown sceptical that as members of the electorate they can effect change by casting their individual votes.

The greatest winner of the regional elections was centre-right politician Xavier Bertrand, who won in the north, finishing more than 25% ahead of the far-right. His result gives renewed impetus to his chances of contesting next year’s presidential elections as The Republicans’ candidate.

Bertrand currently polls in third place behind Le Pen and Macron, but a fresh victory in the regional elections and a joint push by the centrist parties could see him upset next year’s election, which had been expected to be a two-way showdown.