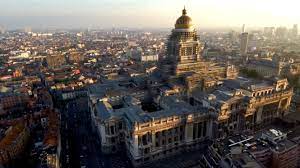 A study of the facade of the Palace of Justice reveals that about a sixth of the bricks from that facade are in bad condition and need to be replaced, a total of 300 square metres. That discovery will again cause delays in the restoration process. As a result, the facade may not be freed from its scaffolding in 2023, but only in 2024 or 2025.

A new in-depth study of the condition of the facade of the Justice Palace (on Place Poelaert) has revealed the worrying condition of some of the facade’s brickwork. She estimates that about 15 percent of the stones are in such bad shape that they may need to be replaced. This is reported by business newspaper L’Echo based on statements by Laurent Vrijdaghs, administrator-general of the Buildings Agency, and the Agency also confirms this to BRUZZ.

Fridayhs expects that this percentage can be extrapolated and that roughly speaking will also apply to the other facades of the building.

Work on the Palace of Justice has been resumed for several months. First of all, the scaffolding around the Palace was renewed so that the condition of the stones of the building could be viewed. They have been exposed to bad weather and pollution for decades and appear to be in bad shape. About 15 percent of the stones are heavily damaged, which corresponds to an area of ​​​​300 square metres.

Since the building is protected, new stones must come from the original quarry and even the original stone vein. The quarry is located in Comblanchien, France, in Burgundy. In addition, each stone will have to be cut to size to fit the facade of the Law Courts, a bit like Tetris cubes.

It is expected that the tiling operation will lead to delays in the renovation of the Palace of Justice. State Secretary Mathieu Michel (MR), responsible for the Buildings Agency, had nevertheless made this highly symbolic operation a spearhead of his mandate. He said in early 2021 that the scaffolding on the facade of the Justice Palace would be dismantled in 2023.

That now seems impossible. Now 2024 or even 2025 is being suggested. “Everything will depend on how many stones have to be replaced effectively, and on the supplies from the quarry,” says spokesperson Johan Vanderborght of the Buildings Agency. The dismantling of the racks could then also take place in two phases. In any case, all scaffolding must be gone by 2030 , when the state of Belgium celebrates its bicentenary.

The inside of the Palace of Justice is being tackled after the facades, and that would still happen between 2035 and 2040. For this purpose, the building is now first fully technically examined and, for example, water and electrical pipes are mapped.