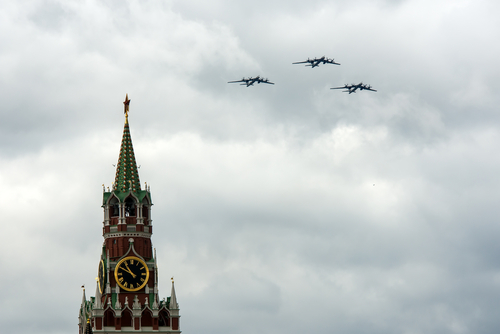 Moscow, Russia - May 5, 2016: The group of Soviet strategic bomber Tupolev Tu-95 (NATO reporting name: "Bear") in training flight at Parade of Victory in World War II May 5, 2016 in Moscow

Brussels (Brussels Morning) Kremlin spokesman Dmitry Peskov warned on Thursday that Russia is closely monitoring Kiev’s attempts to join NATO, and that Ukraine’s accession to the alliance would represent a “red line” for Moscow.

Peskov’s comments, given to the Ekho Moskvy radio station, come a day after Russia’s President Vladimir Putin met his US counterpart President Joe Biden in Geneva, in a summit widely seen as a step designed to improve relations between the two countries.

Moscow traditionally views former Soviet countries such as Ukraine, as remaining within its sphere of influence, and is very wary about NATO expanding into its neighbourhood. Ukraine, on the other hand, is currently exhausted by its fight with Moscow-backed insurgents in its eastern Donbass region. Ukraine’s President Volodymyr Zelensky is actively lobbying to join NATO, hoping that Kiev’s membership in the alliance would help bring the conflict to an end.

Prior to the Geneva summit, Biden met with Zelensky on Monday. Reportedly, the latter asked for a clear yes-or-no answer as to whether Ukraine would be given a plan to join the alliance, but the US President told him Kiev would first need to reduce corruption in the country and meet various other criteria before being granted membership.

Speaking on Thursday, Peskov noted that potential Ukrainian accession to NATO is something Moscow is watching “very closely”. He made clear that the Kremlin considered it “a red line” issue, one that definitely raises Russia’s concerns.

Asked whether Putin would want to meet with Zelensky after the US-Russia summit, Peskov replied that the Russian President was as ready to meet his Ukrainian counterpart as he was before the summit, but admitted that no steps have been taken in that direction so far.

Peskov also dismissed international concerns regarding the buildup of Russian troops near the border with Ukraine. He pointed out that drills with American troops and American weapons and equipment were regularly taking place near the Russian border, whereas Moscow is merely acting with its own troops on its own territory.