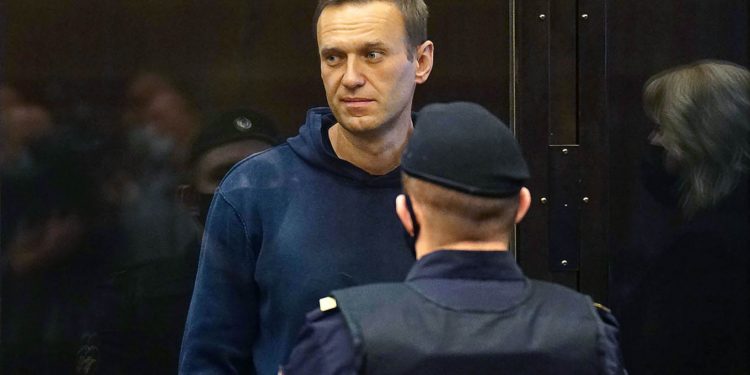 Brussels (Brussels Morning) A Moscow court sentenced prominent Kremlin critic Alexei Navalny to three and a half years in prison for violating the terms of his suspended sentence, AP reported. His prison time will be shortened for time that he already served under house arrest, meaning he still has two years and eight months left of his sentence.

Navalny was arrested on 17 January upon returning to Moscow, having spent five months in Germany, recovering from a poisoning he received last summer while on a local flight in Russia. After he fell into a coma, he was airlifted to Germany for treatment. Subsequently, several independent laboratories confirmed he was poisoned by the Soviet-era nerve agent Novichok. Russia maintains there is no evidence that the 44-year old opposition figure was poisoned.

During his recovery in Germany, Navalny was unable to check in with Moscow prison authorities to comply with the terms of his suspended sentence. He was sentenced to 3.5 years in prison for an alleged embezzlement case, in a trial the European Court of Human Rights (ECHR)ruled was unlawful. ECHR awarded Navalny damages to be paid by Moscow.

Following his arrest, his associates called on Russian citizens to participate in mass protests, which the authorities refused to sanction. Tens of thousands have protested in more than 90 cities across Russia, defying freezing cold and threats of arrests. More than 5,700 people were detained at the most recent protest on Sunday. Police also arrested more than 320 people on Tuesday as they attempted to protest in front of the Moscow courthouse where Navalny was being sentenced.

During the latest trial, Navalny ridiculed the premise and the charge. He pointed out that he had been in a coma, that his lawyers had informed the authorities of this, and that the authorities were aware of his situation and location since it was President Vladimir Putin who allowed his transfer to Germany for treatment and had said as much on public TV. He attributed his arrest to Putin’s “fear and hatred”, declaring the Russian President would  go down in history as “Vladimir the Poisoner of Underpants”, a reference to a tape recording Navalny had publicized in which  an alleged Russian FSB intelligence agency operative claimed agents had placed the poison in Navalny’s underwear.

After the sentencing, western countries immediately called for Navalny’s release, and an end to the authorities’ crackdown on protests calling for his release. US Secretary of State Antony Blinken said Washington is deeply concerned and would coordinate closely with allies about how to hold Russia accountable “for failing to uphold the rights of its citizens”.

Germany’s Foreign Minister, Heiko Maas, called the sentence “a bitter blow to the rule of law in Russia”, and said Navalny should be released with immediate effect. UK Foreign Secretary Dominic Raab also called for his release. “Today’s perverse ruling, targeting the victim of a poisoning rather than those responsible, shows Russia is failing to meet the most basic commitments expected of any responsible member of the international community,” Raab declared.

When the EU Council of Foreign Affairs debated the Navalny’s case last Monday, they condemned his arrest and urged his release, but EU member-state foreign ministers were reluctant to propose new sanctions against Russia at the time, preferring to wait for  the final verdict.

EU High Representative Josep Borrell is to visit Moscow tomorrow where he will meet his Russian counterpart, Foreign Minister Sergey Lavrov. Speaking after Monday’s Foreign Affairs Council session, Borrell noted that the Council is “ready to react as required by the circumstances, and to take appropriate actions.”