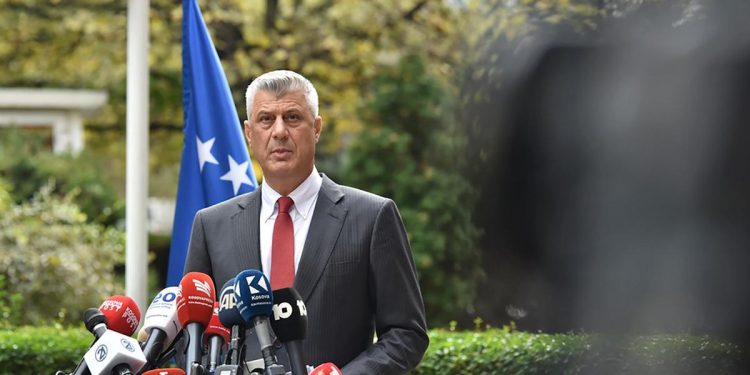 Brussels (Brussels Morning) The President of Kosovo, Hashim Thaçi, resigned on Thursday to face war crime charges at the International Criminal Tribunal for the former Yugoslavia (ICTY), AP reported yesterday, Thursday. Thaçi was a militia leader during Kosovo’s struggle for independence from Serbia in the late 1990es and is accused of war crimes and crimes against humanity.

Thaçi stressed that he is stepping down to protect the integrity of Kosovo’s presidency and to preserve the truth of which side was the perpetrator and which the victim. “We are a freedom-loving people and not vengeful”, Thaçi said, contending that Serbia was the aggressor and Kosovo the victim.

He was indicted in June this year, along with nine other former militia leaders. They face charges including persecution, enforced disappearances, torture and murder. More than 10,000 people were killed in the 1998-1999 war, mostly ethnic Albanians, with 1,641 people still missing. The war was ended by a NATO air campaign against Serbian troops.

Thaçi said he was proud of his time as a commander in the Kosovo Liberation Army (UÇK) and that the indictment is a small price “to pay for the freedom of our people.” The Kosovo government pointed out that defendants must be considered innocent unless proven otherwise, stressing that the UÇK did not fight in a foreign land, which is why it has the support of the international community.

Also charged with committing crimes during the war is the former speaker of parliament Kadri Veseli, who announced that he is travelling to The Hague, having resigned from all political and public positions. Both Thaçi and Veseli have denied any wrongdoing.

Thaçi transferred his presidential duties to speaker of parliament Vjosa Osmani. The government has pointed out that the transition of power was smooth, leaving no institutional vacuum in the process. Thaçi was elected in 2016 and his term was due to end in April next year.

The EU has welcomed Thaçi’s cooperation with institutions in The Hague, and has expressed its support for the work of the Kosovo Specialist Chambers and Specialist Prosecutor’s Office (KSC & SPO). Cooperation with relevant institutions is necessary and demonstrates Kosovo’s commitment to the rule of law, the EU statement noted, noting how telling this commitment was for Kosovo’s EU membership aspirations.