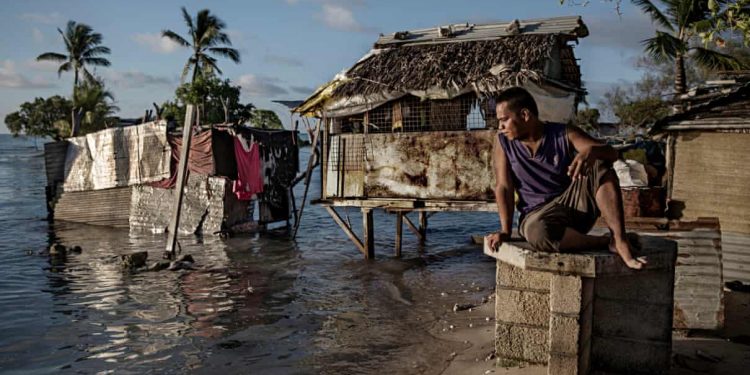 Kiribati will raise its islands above the ocean as part of its fight against sea-level rise, seeking help from its new diplomatic partner China to secure the archipelagic nation’s future, the country’s newly re-elected president has said.

In his first in-depth interview since his resounding election win in June, Taneti Maamau told the Guardian international co-operation would be on Kiribati’s terms: he said he would not accept large loans “from any country”, and would not allow China to build a base on Kiribati’s strategically significant Christmas Island, south of Hawaii.

Maamau said his government’s strategy “identifies raising our islands” as a counter to climate change, and plans “to secure dredgers that will assist with these efforts”.

“There are already plans to build up part of [the capital atoll] Tarawa through dredging fill materials from the lagoon. Kiribati in its 20-year vision has also included strategies to secure dredgers that will assist with these efforts as well as dredging channels in the outer islands,” he said. Dredging can impact coral reef ecosystems.

“We are also working with New Zealand’s National Institute of Water and Atmospheric Research to develop a long-term coastal security strategy for Kiribati,” Maamau said.

“The strategy is still in development but clearly identifies raising our islands as a way forward in our fight against climate change. This is also clearly demonstrated in our national climate change policy.”

Maamau has enlisted the advice of Professor Paul Kench, dean of science at Simon Fraser University in Canada, and a leading researcher on the response of atolls to sea-level changes.

To solve chronic flooding in the overcrowded capital, Tarawa, Kench has proposed replacing causeways – landfill between islands that supports the main road but which can cause beach erosion – with an elevated bridge road running the entire length of the atoll on the sheltered lagoon side. It is the sort of massive infrastructure project China might fund, and has the expertise to engineer. China recently built a long bridge between Male and its airport in the Maldives.

“The idea of building an elevated road parallel to the coast is something that we would like to explore in future with our partners,” Maamau said.

A former British colony made up of three archipelagos sprawled over an ocean area the size of India, Kiribati – pronounced Kiribahss – has acquired significant strategic importance in the era of US-China rivalry in the Pacific.

The US military has flagged concerns that Kiribati might allow China to build dual-use – military and civilian – facilities on its largest island, Christmas, just 2,000km south of Hawaii, and home of the US Pacific Fleet.

Kiribati is already developing fishing infrastructure on Christmas in partnership with a Chinese company. “There was never any intention or plan by this government to allow China an accessory base in Kiritimati [Christmas],” Maamau said.

China has a record in small, vulnerable states of granting loans to build what Beijing wants – often not what the beneficiary country needs – through a combination of gifts and bribes, a process known as “elite capture”. Kiribati, a least developed country historically dependent on foreign aid for upwards of 40% of its budget, is seen as acutely vulnerable.

But Maamau said Kiribati would safeguard its independence. “My government has no intention to acquire large loans from any country in the near future.”

Besides the strategically located Christmas, Kiribati’s capital Tarawa is just 1,000km south-west of the US military installations in Kwajelein.

A treaty between Kiribati and the US prohibits any other country from building military installations in Kiribati without “consultation” with Washington first.

US and Australian concerns emerged last year after Maamau made a sudden and controversial decision in September last year to switch Kiribati’s diplomatic recognition back to China after 17 years allied to Taiwan.

The decision caused the chairman of Maamau’s party to join the opposition – leaving Maamau with a minority in parliament – and run for president against him.

June’s presidential election was seen, in part, as a referendum on the decision to switch from Taipei to Beijing.

Maamau won comfortably, 26,053 to 17,866. Following his victory, several MPs crossed the floor to join the government, leaving Maamau with a 24-to-19 majority to pursue his agenda, developing tourism and fisheries while taking the adaptation measures that will allow Kiribati’s 110,000 people to remain in their homeland.

The election was rife with accusations of corruption from both sides: all of which have been denied.But whether Maamau can deliver his promises, and keep Kiribati free from malign foreign influence, will be closely watched, domestically and internationally.

Maamau’s predecessor as president, Anote Tong, had forecast widespread forced displacement from Kiribati because of rising seas, worsening salinity, and increased vulnerability to disasters. Tong’s administration even bought land in Fiji as a potential new homeland.

Maamau has rejected migration as a strategy, arguing studies have shown the islands can survive with the right adaptation measures, and saying the people of Kiribati will not be forced to leave.

Studies, by Kench and others, have found that waves rolling over narrow atoll islands every few years leave sand behind, raising islands in tandem with the sea.

“Atoll islands are in a state of equilibrium with the sea, which is why most are at the same height,” Kench said in an interview.

Kench argues the solution involves razing houses and large-scale sand dredging to raise the island, stretch by stretch, by half a metre to a metre, to secure the island’s safety for 50 or more years.