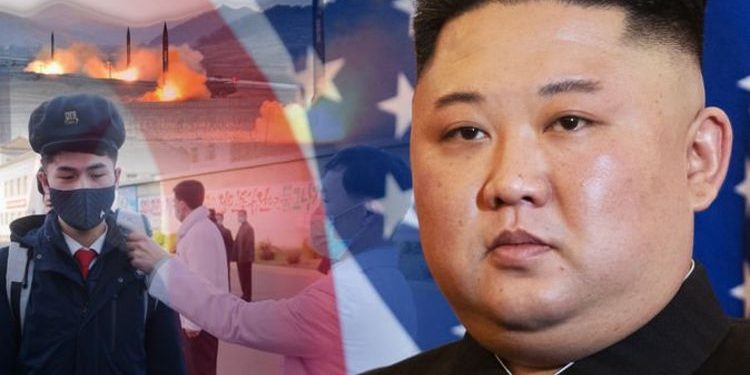 KIM JONG-UN’s state may continue to further ballistic missile tests instead of shifting all focus onto medicine during the coronavirus pandemic, a North Korea expert claims.

North Korea is yet to confirm their first case of COVID-19 but locked down the city of Kaesong two weeks ago and recently 43,000 Red Cross volunteers were dispatched to help. The area, several miles away from the South Korean border, is where authorities claim a defector suspected of carrying the deadly virus illegally returned to their home state. While coronavirus has infected more than 20 million people worldwide and led to the deaths of nearly a quarter of a million, Kim Jong-un’s state previously claimed to be unaffected but had quarantined more than 10,000 citizens. If an outbreak did occur in the nation, the public would be at an exponentially higher risk of death according to experts. They also claimed that despite the current world events, Kim Jong-un may be gearing up for further missile tests.

While coronavirus has ravaged many countries across the world, an outbreak in North Korea could be even more catastrophic due to the poor conditions the population lives in and a “lack of health vaccine infrastructure”.

The Centre for Strategic and International Studies (CSIS) claimed that citizens would be threatened further because many in the nation are malnourished or battling starvation, highlighted by the 1-2 million metric tonne food shortages each year.

They believed large swathes would be considered especially at risk due to having been “afflicted by different diseases” that the majority of other countries in the world had eradicated – such as tuberculosis.

CSIS expert Victor Cha told ‘The Impossible State’ podcast in April: “This is already a vulnerable population, we talk about people with preexisting conditions and people over the age of 60 or 70 to be vulnerable and compromised.

“But you could say that about the entire North Korean population of 25.5 million people, this is a population which if this virus was there could do some really horrible damage.”

The CSIS, which is a US-backed think tank, believed that North Korea would continue to conduct missile tests – despite the pandemic – because of a breakdown in communication with the West.

They noted that in the past, Kim Jong-un had carried out these exercises when there was “absence of working diplomacy” and when US elections were approaching.

Mr Cha said: “When we have had a midterm or presidential election, North Korea always tends to ramp up testing in those years.”

He highlighted that tensions were likely high due to sustained economic sanctions placed upon the hermit state by the US – which they vented frustration opposition to in recent months.

Mr Cha added: “North Korea said that they were not interested in negotiations any more.

“With the absence of diplomacy and… an election in the US, these two things lead us to believe… we should expect to see more testing by North Korea.”

The only aversion to this course of action he could predict was “some heroic leader-to-leader diplomacy” between US President Donald Trump and Kim Jong-un, which he deemed “very unlikely”.

The expert compared the Northern and Southern state’s response to the pandemic – and revealed that the latter was held-up as a poster-child for their speedy reaction to combat the outbreak.