Just as busy as usual in Brussels cinemas: ‘We won’t let ourselves be fooled anymore’ 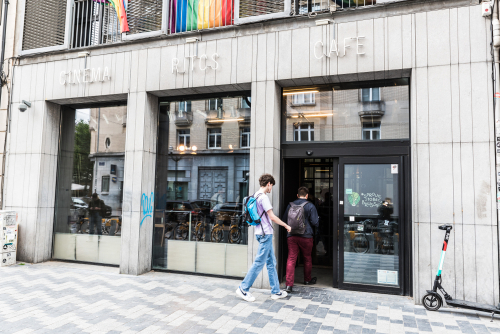 Brussels (Brussels Morning) The Brussels cinemas that remain open on Monday are just as busy – if not busier – as usual. One reporter from BRUZZ was told that in Cinema Palace, in the heart of Brussels. “We still don’t know what we risk by staying open.”

It is busy at the entrance hall of Cinema Palace on the Anspachlaan. Families line up patiently, in time to attend the first film screening on Monday morning. Covid Safe Tickets are neatly sold out. “There are at least as many people as on a normal Monday during the holiday,” says the cashier. However, it is not going over the heads, according to the BRUZZ reporter on the spot. “Well, that’s not often the case on a Monday morning.”

Most of the visitors are waiting for the opening of the exhibition on Louis de Funès, which is currently running in the Palace halls. “So that is legal,” puffs manager Eric Franssen, who does not hide his incomprehension. What Franssen risks by welcoming visitors to the cinemas remains unclear even to him. “If the police come by, we will have a conversation. I don’t know what to expect, maybe a fine?”

In addition to Cinema Palace, a handful of other cinemas will keep their doors open on Monday. They do this in protest against the corona measures in force that prescribe a closure of the cultural sector. And yes, visitors sign up there too. “Yesterday was a success and today we expect nothing else,” says Peggy Fol of Cinema Vendôme in Ixelles. “What do you want? We have always followed the measures closely. Even virologists do not understand the mandatory closure. That makes no sense,” she says on the phone.

“The police can storm in here at any moment and give us a fine. We are aware of that. But we have mutually agreed (along with other protesting cinemas) that we will contest any fines. We will not let ourselves be done anymore. “

“In the first phase, we will mainly raise awareness,” says the spokeswoman for the Brussels-Capital-Ixelles police zone in a response to BRUZZ  She refers to previous communication from the chairman of the permanent Commission for Local Police Nico Paelinck. “The Royal Decree appeared on Christmas Day, the additional guidelines even later. The normal course of action is for the sector to organize and raise awareness during the first weekend.”

“In the second phase, the inspection services came up with the idea. They also have to organize themselves: draw up guidelines. Those services will be on the road today. They check who is coloring outside the lines and then action is taken, possibly first via a warning, later via a report if there is manifest unwillingness.”