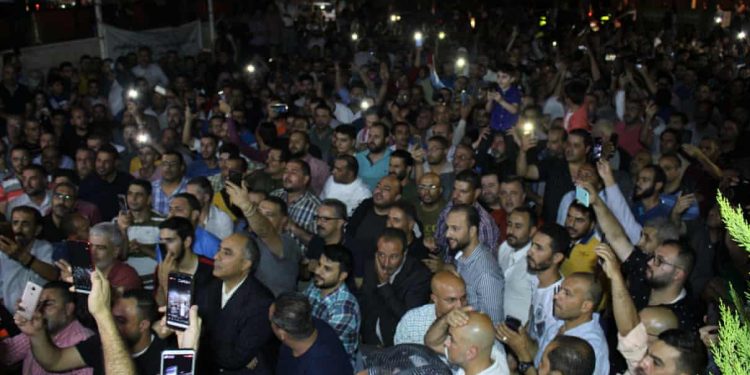 He spent 17 days on the run, moving surreptitiously, sleeping in different homes. When Sharaf Obeidat saw security forces surrounding his building, he knew it was over. “They’ve arrested me,” he managed to write on Facebook, before he was hooded, handcuffed and led away.

Neither a violent criminal, nor a political dissident, Obeidat is one of what lawyers estimate is about 1,000 teachers arrested across Jordan in the past few weeks as part of a crackdown on the kingdom’s largest independent trade union, the Jordan Teachers’ Syndicate.

The 100,000-strong union held the longest public-sector strikes in Jordan’s history last October, culminating in what it called a “historic agreement” to increase teachers’ wages.

One morning last month, police sealed its branches across Jordan, the union was banned from operating for two years, and its 13 elected council members were arrested on secret allegations. Emergency laws passed to fight coronavirus have been used to detain some of the thousands of teachers who have turned out to protest, according to lawyers for the union.

A gag order imposed on the Jordanian media has banned all but the barest coverage of the arrests, the charges against union members and the resulting demonstrations.

Jordan is no democracy, but has been regarded as more pluralistic and tolerant of dissent than neighbouring states such as Saudi Arabia and Egypt. Protests are permitted up to a point, and media is relatively free to criticise government policies, though that space has been shrinking and the number of people being detained without trial each year is growing.

Analysts say the scale and intensity of the campaign against the teachers union could signal a shift towards more repressive tactics as Jordan navigates the economic fallout of the coronavirus – one that might be mirrored elsewhere in the Middle East as the impact of global lockdowns bite harder in the months ahead.

The Jordanian government says the decision to shut down the Teachers’ Syndicate and arrest its leader was taken independently by the judiciary “in reference to economic crimes”.

“All orders were issued by prosecutor general who are members of the judicial authority and they practise their jurisdiction independently as per the law and constitution,” said Amjad Adayleh, the government’s spokesman, in a statement to the Guardian.

Some government supporters have characterised the campaign against the union as part of a larger regional struggle between Arab monarchies and the Muslim Brotherhood, the transnational Islamist group that was formally banned in Jordan the week before the teachers’ union was shut down.

Diplomats in Amman said the Brotherhood clearly had some presence in the union, with its current president and about a third of its council said to be members. But they said the Islamist group was one of several major forces in the union, and that its influence was likely to be limited given the syndicate’s enormous and varied membership.

Jordanian governments have long been wary of teachers organising. The syndicate was banned for more than half a century until 2011, when the government permitted its reestablishment as part of a raft of concessions to protest movements that sprung up in Jordan as part of the Arab spring.

In a country where political parties are tightly controlled, and syndicates of lawyers or engineers are small and largely middle or upper class, the teachers’ union is unique: large, working-class and diverse, made up of Jordanians and Palestinians, rural and city dwellers, and people from every part of the country.

The wage increase the teachers’ union negotiated last year was frozen by the government in April, amid a wider suspension of public-sector pay rises as a result of coronavirus. The syndicate had been planning new protests to unfreeze its pay rise in the days before it was shut down.

Asem Al-Omari, a lawyer advising the Teachers’ Syndicate, said the government was anticipating economic trouble in the months ahead and was trying to clear the field of potential opposition.

He said: “If you face a minefield, it’s better to explode them separately, instead of having them all explode at the same time.”

Demonstrations are still being held across Jordan despite forceful police responses. On Thursday, a handful of families turned out for a protest in the northern city of Irbid, wearing masks and carrying balloons scrawled with messages including, “With the union”.

They were met by a force of armed police officers and soldiers with armoured vehicles. Security personnel marched towards the small crowds, sending people scattering into the surrounding streets. A handful were arrested and bundled into a small metal box, including an older man in a prayer cap. “If they’re standing still, bring them here,” one officer ordered his men.

The crowd was quickly dispersed, but activists on a nearby roof managed to release helium balloons tied to placards carrying slogans of support for the union.

The government was hoping its tough stance would quell street protests, Al-Omari said. But unless an agreement was reached, the union did not intend to go quietly. He said: “We will make it last months. We will make it difficult.”