Jon Hassell, music’s great globetrotter: ‘Be more aware of the rest of the world!’ 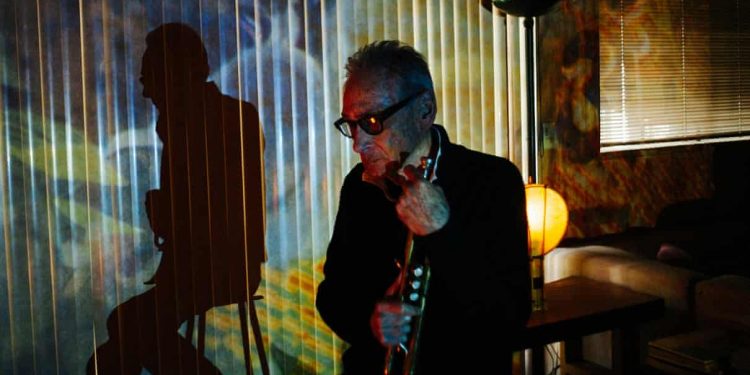 Crackling down a phone line from Los Angeles, Jon Hassell apologises in advance. Now 83, the multi-instrumentalist and composer – a hero of Brian Eno, Björk, Bono, Jean-Michel Basquiat and others – fell in his recording studio earlier this year, breaking his leg. The subsequent recuperation in a convalescent hospital went on for four months. He had no visitors, due to the coronavirus pandemic, “so I only had my cell phone to maintain contact with the outside world”.

It is an experience that has had after-effects. “I’m feeling a little bird-out-of-cage-like,” he says. “I’ve just got a new apartment and I’m sitting here looking at all the things I’ve brought out of storage yesterday. The place is full of stuff and I have to dig through a lot of things now. And that kind of includes my memory,” he adds, referring to our conversation. “You might hear me searching for really polished answers. But let’s give it a try.”

He really does not need to apologise. He occasionally pauses after I ask a question – “Now, let me see …” – and occasionally returns to a subject some time after I assume we are done with it, but Hassell is a fascinating interviewee, with an astonishingly rich history and umpteen intriguing theories about music.

His most recent is what he calls “pentimento”, a term he borrowed from painting that refers to images and forms that have been painted over in a finished work. He has applied the idea to music on his latest album, Seeing Through Sound, and its 2018 predecessor, Listening to Pictures: they are dense, shifting sound collages, in which, as he puts it, “layers of corrections are used to effloresce out to something”.

The results are experimental, but enveloping and frequently very beautiful, adjectives you could just as easily apply to the recordings Hassell made in the late 70s and early 80s exploring what he called “fourth world” music, perhaps his most influential idea of all. “A signal to the rest of the world: quit ignoring the incredible beauty of African and Brazilian and Indian music,” he says, attempting to neatly summarise the music on 1977’s Vernal Equinox and Fourth World Vol 1: Possible Musics, his 1980 collaboration with Eno.

They are albums that ideologically, if not sonically, anticipated the global melting pot of modern pop. It is now common for Latin American rhythms or Afrobeats to blend with hip-hop and house, or for a band such as the Texas trio Khruangbin to stir Thai, Mexican and west African influences into a psychedelic “Earth music”. “Just be more aware of the rest of the world,” Hassell advises. “I’m very proud of the fact that it has sort of caught on with young musicians: the degree of awareness these days, because of all the technological possibilities. The fourth world is something that says: I’m aware of that, I’m aware of this and here’s what I’m coming up with.”

Looking back at Hassell’s career, you can see how he ended up determined to break down boundaries between jazz, modern classical and global music. He was born in Memphis – “I’m proud that I came from the same place as the blues” – but moved first to New York, then Cologne, studying under Karlheinz Stockhausen alongside Holger Czukay and Irmin Schmidt of Can, the latter enlivening their studies by smuggling in LSD from Amsterdam. He attempted to apply Stockhausen’s experiments with cut up and looped tapes to a recording of the Hi-Lo’s, an American jazz vocal group: “They had very advanced harmonies, 13th chords and that kind of thing, and I wanted to see what they sounded like cut up and looped … [the results] were hard to describe verbally”.

On returning to the US, he befriended Robert Moog, who was using his recently invented Moog synthesizer to create “environmental pieces” alongside another friend, the composer Terry Riley. “Terry would do these all-night performances where everyone would end up lying on the floor, listening: very engrossing and immersing; things changing so gradually you didn’t really know they had changed. ‘I was listening to this four minutes ago, now, oh my God, it’s completely different, but I did not experience it.’”

He played trumpet on the first recording of Riley’s minimalist masterpiece In C, worked with La Monte Young’s Theatre of Eternal Music – whose ranks had previously included John Cale and Sterling Morrison of the Velvet Underground – then repaired to India to study under the classical singer Pandit Pran Nath, whom he still describes as his greatest influence. “Any music is an art, but the study of raga, it’s just miraculous; it’s a sonic temple. How you use it and don’t use it is significant. I was using it on the trumpet – not a continuous-stream instrument, right, so I had to learn how to simulate all the ganaks, the ornamentation. You want to use the possibilities and potentialities of the western instrument while not ignoring the shape-making of what raga means. It’s like calligraphy – sonic calligraphy.” Ry Cooder has said Hassell is “one of the three or four players of wind instruments in the world who can command your attention with one note”.

Vernal Equinox was the first fruit of his explorations of non-western music: recently reissued, it sounds astonishingly timeless, perhaps because it was like nothing else released in 1977, Hassell’s trumpet floating through landscapes of electronics, drones and Indian and South American percussion. His fourth world experiments have failed to attract the charge of cultural appropriation, perhaps because he always gave lavish credit to his sources and collaborators: as Eno once wrote, in an essay titled The Debt I Owe To Jon Hassell: “If I had to name one over-riding principle in Jon’s work, it would be that of respect: he looks at the world in all its momentary and evanescent moods with respect, and this shows in his music.”

Hassell was supposed to be the third collaborator on Eno and David Byrne’s seminal My Life In the Bush of Ghosts. However, having contributed “sketches” to the project, he quit early on, unimpressed with what Eno and Byrne had done. His name was removed from the credits of an album that he later protested “came out of me”. Today, he seems philosophical about his forays into the pop world. “It’s a matter of knowing: what is it I really like?” he says. “And then you can either drive it into the ground and get put in an asylum, or you invent something, you make something from that initial spark.”

Given his current medical travails, he is not sure what the rest of his ninth decade has in store. He has his own label, an offshoot of the electronic giant Warp, which is a testimony to his influence on electronic music; he has been sampled by everyone from Ricardo Villalobos to Arca. He vaguely moots plans to resurrect some of the “environmental pieces” that he worked on in the 60s. And he has a book waiting to be published, The North and South of You; it expounds another musical theory, the battle between the intellectual and the Dionysian in art.

“I could never pick up the trumpet again and have fun,” he says. “But I don’t intend to do that anyway.” He chuckles. “I have plans.”