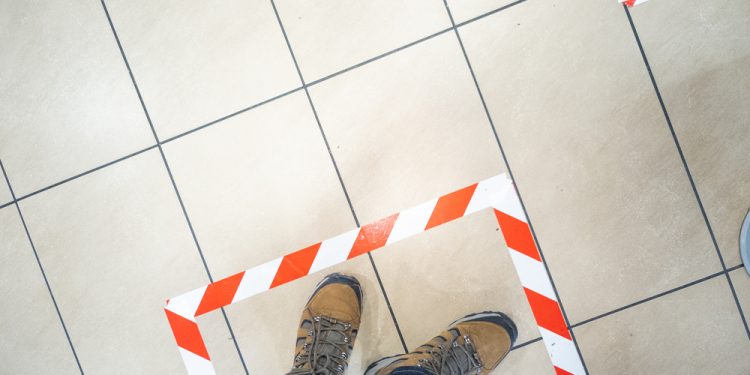 Tape on the floor of a McDonald's restaurant, so that customers practice social distancing, during the Coronavirus (covid-19) crisis.

London (Brussels Morning) In only the second time in a century, the two top British medical and healthcare journals penned a joint editorial denouncing the government’s decision to continue with plans to relax restrictions currently in place to help stem the spread of the coronavirus.

In the article published today, the British Medical Journal and the Health Service Journal said the government should cancel plans to let three households mix between 23 and 27 December so families can unite for Christmas.

“We believe the government is about to blunder into another major error that will cost many lives”, read the editorial.

“If our political leaders fail to take swift and decisive action, they can no longer claim to be ‘protecting the NHS’”, it continued referring to the government’s public service announcements to protect the NHS as it became overwhelmed during the peak of the outbreak.

The editorial comes a day after the government announced the capital would go into the most restrictive category within its three-tier regional approach to safeguard against the virus’s excessive spread.

The editorial further warned that the current trajectory would see 19,000 COVID cases admitted to hospital before 2021, the same levels seen on 12 April during the peak, numbers exclusive of the potential impact of inter-household mixing over Christmas.

“The new year is likely to see NHS trusts facing a stark choice: be overwhelmed or stop most elective and non-urgent work.

“Rather than lifting restrictions over Christmas as currently planned, the UK should follow the more cautious examples of Germany, Italy and the Netherlands”, said editors.

It also took aim at the current regional approach to imposing restrictions, which the editors said did not work to suppress the virus, warning that even successful rollout of the vaccine by Easter will still not prevent many hospitalisations and deaths:

“Even if NHS England succeeds in vaccinating all those ’at risk’ by Easter, this will not be in time to prevent hospitalisation and death for many during the next few months”.