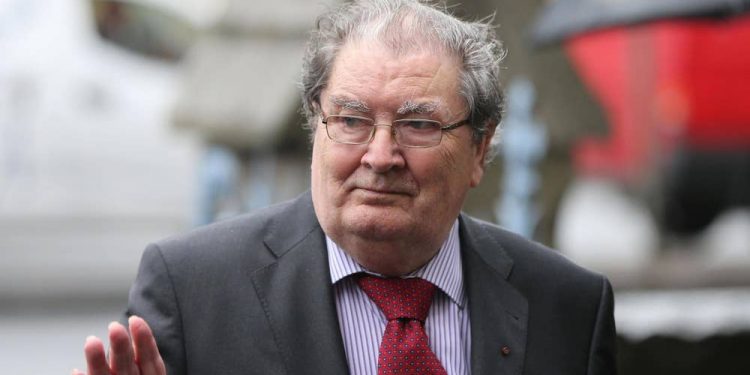 His death marks the passing of one of the most important Irish political leaders of the 20th century whose ideas of compromise, opposition to violence and cross-community outreach underpinned the principles of the 1998 Good Friday agreement.

Hume was described on Monday as “the man who kept hope alive” during the darkest days of the Northern Ireland Troubles.

In a statement on Monday morning, his family confirmed that Hume had died in a nursing home in his native Derry. He had had dementia for many years.

The Hume family paid tribute to the people of Derry and Moville/Greencastle across the border in County Donegal for supporting him and them during his long illness.

“Celebrating community in all its diversity went to the heart of John’s political ethos and we are very appreciative that our communities supported, respected and protected John,” the Hume family statement said.

They added that in these “strange and fearful days” it was important to remember the phrase from the civil rights movement of the 1960s that Hume adopted in Northern Ireland: “We shall overcome.”

Out of the Northern Ireland civil rights movement Hume helped found the nationalist Social Democratic and Labour party. He became SDLP leader in 1979 and is attributed with helping create the atmosphere that enabled the IRA and loyalist ceasefires of 1994.

The current SDLP leader and MP for Foyle, Colum Eastwood, said Hume had been the modern-day inheritor of a peaceful nationalist tradition stretching back to Daniel O’Connell and Charles Stewart Parnell in the 19th century.

Eastwood said Hume’s “life’s work brought to an end the seemingly intractable historical arc of bitter conflict between the neighbouring islands of Britain and Ireland”.

He added: “In setting off on that political path, John embodied and thus gave birth to a new political creed on this island, transforming the conflicting traditions which had rigidly defined our past. That new creed imagined a better and a shared future beyond the rubble of our history. It taught us that it is far better to live for Ireland than to die for Ireland, it challenged us to pursue the path of politics rather than the reactionary instinct of violence, it dared us always to choose principle ahead of easy populism and it told us that human difference doesn’t have to mean division.

“The Good Friday agreement, embraced and endorsed by the Irish people in 1998, is the institutional embodiment of that creed and its vision. John was not simply the agreement’s architect or its builder, he was very much both. He will forever remain its enduring inspiration.”

David Trimble, who was a joint winner of the Nobel peace prize with Hume in 1998, paid tribute to his steadfast opposition to all political violence. The pair played a critical role in reaching the peace accord in Easter week 22 years ago.

He said: “Even before he played such a vital role in securing the Belfast agreement, from the outset of his career John was firmly committed to peaceful means and opposed the efforts of other people to achieve their objectives through violence. Those who thought they could win using violence could not succeed and eventually realised that they had to come into the political process as John had long argued.”

The former Ulster Unionist leader recalled that he and Hume staged a highly symbolic joint display of unity in the post-peace prize celebrations in Oslo.

Lord Trimble said: “The hotel staff had set aside two rooms, one for the SDLP delegation with John in Norway and another one for the UUP delegation and myself. We were to have separate parties to toast the Nobel peace prize win that year. But we told the hoteliers politely that no, we wanted to hold a party together to celebrate. So, the SDLP and UUP had a party for John and myself, and I remember thinking at the time that this was a good omen for the future of the agreement.”

The former British prime minister Tony Blair described Hume as a “political titan and a visionary.” He said: “His contribution to peace in Northern Ireland was epic and he will rightly be remembered for it. He was insistent it was possible, tireless in pursuit of it and endlessly creative in seeking ways of making it happen.”

Micheál Martin described Hume as “a great hero and a true peacemaker”. The Irish taoiseach said: “Throughout his long life he exhibited not just courage, but also fortitude, creativity and an utter conviction that democracy and human rights must define any modern society.

“During the darkest days of paramilitary terrorism and sectarian strife, he kept hope alive. And with patience, resilience and unswerving commitment, he triumphed and delivered a victory for peace.”