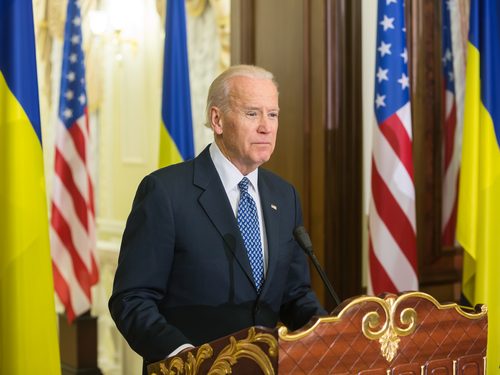 Joe Biden during an official visit to Kiev, Ukraine

The USA, (Brussels Morning Newspaper) Russia’s war on Ukraine has led to a humanitarian crisis in Ukraine as approximately a million people have fled the country, civilians have been killed and non-military targets have been bombed. The need to get food and healthcare for Ukrainians inside and outside of the country will likely only increase in the coming days and weeks. While this is a tragedy for the Ukrainian people, the war has not exactly gone as Russia and its President, Vladimir Putin, apparently thought it would.

The Ukrainian military, as well as its civilian leadership and courageous citizens, have fought back, slowing Russia’s advance and inflicting casualties on its invading forces. Russia still has a much more powerful military and, unfortunately, the ability to cause even more damage to Ukraine. However, the fight against Russia has not just taken place on the battlefield, where the valiant Ukrainian forces are out-numbered and alone. It is also happening on an economic battlefield, where Ukraine has the support of some very powerful allies.

The sanction regime appears to be growing tougher with every passing day and is being joined, in one form or another, by countries like Japan and Switzerland, nations that do not usually participate in these kinds of ventures. Sanctions include cutting off Russia from western markets, and making it extremely difficult for Russia, and Russians, to access wealth that is held outside the country.

The sanctions are strong because so many countries are participating. Virtual unity from western powers is the only way to make sanctions stick and ensure an impact, otherwise they are just symbolic — and this is where Joe Biden’s role deserves some attention. The US foreign policy elite frequently speaks of the importance of American leadership. This is often expressed in very vague terms while usually treated as a given, yet the idea is never sufficiently fleshed out or explained adequately.

The efforts to sanction Russia following its invasion of Ukraine mark one of those times where the role of leadership has proved to be vitally important. Had the US not taken a leading role on these sanctions, it is unlikely that they would have been implemented so effectively. This is evident in many ways. For example, the US is both an Atlantic and Pacific power, so bringing Japan, a very important non-European country, into the sanctions coalition would have been difficult to accomplish without US involvement. Similarly, many European countries do a fair amount of business with Russia and stand to suffer direct economic consequences as the sanctions bite. However, since these countries are also part of security and economic relationships in which the US plays an important role, Washington has been able to nudge them into participating in the round of sanctions.

Critically, the coalition that has been assembled was not the result of US threats or assertions of power, but, rather, reflects an exercise in genuine give-and-take between states. Much of the credit for this goes to President Biden, who was smart enough to let France and Germany, and not the US, be the face of negotiations in the weeks leading up to the war. While those efforts may seem to have failed, they sent a message to Washington’s allies that this was not about us.

Biden’s rhetoric on Russia helped frame the sanctions effort as he hit almost all of the right notes. In the days after the start of the war, the US President and his government made it clear that they view the war as entirely the fault of Russia and Putin and that all of the US’s allies should see it that way too. Biden had his “with us or against us” moment, but in a manner that won over rather than angered Washington’s traditional allies.

There is no question that Putin’s aggression in Ukraine has bolstered and unified NATO in a way that NATO could not have done itself. Yet, even given that, leadership was required to turn that sentiment into action. It is still too early to know what impact the sanctions will have on Russia, but it is clear, and becoming clearer every day, that these sanctions are without precedent and that they are isolating Russia from much of the rest of the world.

In the early days of this crisis, President Biden pledged that he would not send US troops to Ukraine. This was a concession to both domestic political realities in the US and to the likelihood that fighting between US and Russian troops in Ukraine would escalate the conflict even more. That remains the right decision and Biden has stuck with it. Instead of a military conflict, Biden and European leaders have executed a kind of economic war that has never been tried in modern history. Other countries have, at times, been isolated from the global economy, but not so quickly and as a direct response to an act of war. This is a different model of US leadership — one that emphasises cooperation and innovative strategy over bluster and military might. If it works, it will have been Joe Biden’s finest moment so far.