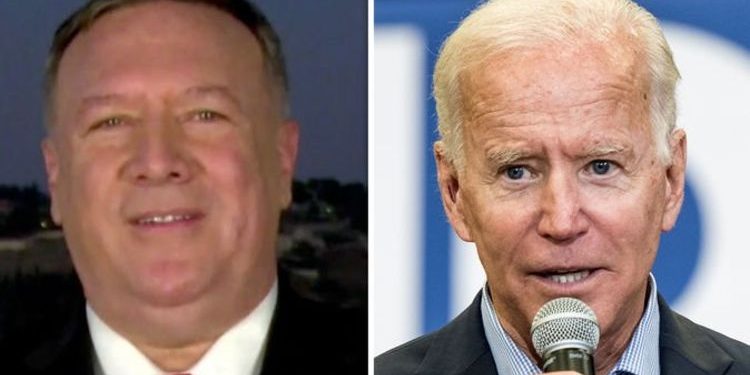 US SECRETARY OF STATE Mike Pompeo has been accused of an “absolutely disgraceful” abuse of power after delivering a speech to the Republican National Convention (RNC) from Jerusalem.

Mr Pompeo, a close Trump ally, delivered his remarks whilst on an official government trip to the city. He was accused of undertaking the “politicisation” of American diplomacy by a senior Democratic figure.

“Even by this administration’s abysmally low standards, Secretary Pompeo’s decision to serve as an errand boy for the President’s re-election on a taxpayer-funded diplomatic mission, and his decision to use one of our closest partners as a political prop in the process, is absolutely disgraceful.”

According to The Washington Post no previous Secretary of State has addressed a US party convention though some have attended.

Traditionally senior American diplomats are expected to avoid doing anything that could politicise their roles.

According to the State Department Mr Pompeo made his speech in a personal capacity and it did not involve US government resources.

He said Mr Trump’s ‘America First’ policy “may not have made him popular in every foreign capital, but it’s worked”.

Mr Pompeo also praised the president’s involvement in a new treaty between Israel and the UAE describing it as “a deal that our grandchildren will read about in their history books”.

Turning to the coronavirus he added: “The president has held China accountable for covering up the China virus and allowing it to spread death and economic destruction in America and around the world and he will not rest until justice is done.”

In December 2017 Mr Trump recognised Jerusalem as the capital of Israel and relocated its embassy from Tel Aviv.

This had been long sought by the Israel government with which the US president is close.

However most other countries, including the UK, argued against the move and said they would be keeping their embassies in Tel Aviv.

Senior Democrats harshly condemned Mr Pompeo’s decision to address the convention from Israel and suggested it might not be legal.

A congressional probe into the move has been announced by the House Foreign Affairs Committee’s Oversight and Investigations Subcommittee.

In a statement Democratic congressman Joaquin Castro, who chairs the oversight committee, hit out at the speech.

He said: “The Trump administration and Secretary Pompeo have shown a gross disregard not only of basic ethics, but also a blatant willingness to violate federal law for political gain.

“Congress has a responsibility to stand up for the rule of law and hold them accountable for this corrupt behaviour.”

He said: “Biden has promised to take that money back out of your pocket and keep it in the swamp.”