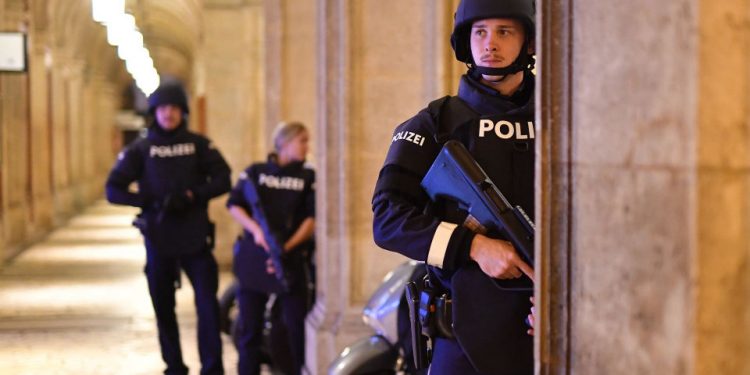 Brussels (Brussels Morning) At least four people were killed and 15 wounded in shootings carried out by at least one jihadist in Austria’s capital Vienna, DW reports. Austrian Minister of Interior Karl Nehammer stated that police had shot and killed a heavily armed attacker who supported the Islamic State of Iraq and the Levant (ISIL).

The attacker was armed with an assault rifle and wore a fake explosive vest. Nehammer said the authorities had not ruled out the possibility that more attackers were involved.  He noted that Austria had not experienced a jihadist attack in decades.

The death toll in Vienna has risen to four according to ORF, Austria’s national broadcaster, Reuters reported Tuesday. Police said two people have been arrested in connection with the attack, APA reported. Seven people wounded in the attack are in life-threatening condition.

The attack started late on Monday in front of Vienna’s main synagogue. According to police, suspects armed with rifles were sighted in six locations across the city.

Austria’s Chancellor Sebastian Kurz described the shootings as a terrorist attack. He announced that the Armed Forces would be deployed to protect sites in Vienna so that police could focus on anti-terror operations.

Germany’s Chancellor Angela Merkel expressed solidarity with Austria, stating that Islamist terrorism is a common enemy. Germany stands with Austria in the fight against these murderers and their instigators, she asserted.

France’s President Emmanuel Macron expressed shock and sadness over the attack in Vienna. This is our Europe, he stressed, and our enemies need to know who they are dealing with because we will not give in to anything.

Italian Prime Minister Giuseppe Conte condemned the attack, saying there was no place for hate and violence in the EU. Italy’s Minister of Foreign Affairs Luigi Di Maio added that Italy stands with Austria and concluded that Europe must respond.

Czech Interior Minister Jan Hamáček noted that Czech police were in touch with their Austrian counterparts, adding that police had tightened supervision over major Jewish facilities as a preventative measure in response to recent developments.

US President Donald Trump condemned “yet another vile act of terrorism in Europe,” stressing that the US stands with Austria, France and all of Europe in the fight against radical Islam.