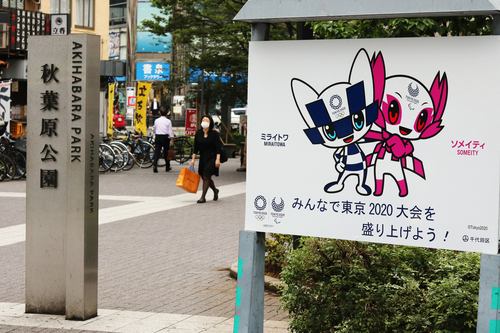 TOKYO, JAPAN - June 30, 2021: A sign promoting the Tokyo Olympics and Paralympics featuring their mascots Miraitowa and Someity in a park in Tokyo's Akihabara area.

Tokyo (Brussels Morning). A few days before the kick off of the Tokyo Olympics, the atmosphere appears more worried than jubilant. The opening ceremony is on July 23 and will feature thousands of athletes, plus tens of thousands of officials and volunteers from all over the world. The first cases of infection have already emerged.

The Tokyo city assembly was polarised over the decision to push forward with the games. Public opinion in Tokyo, in a country that has a very slow vaccination rollout, is against the games. Thousands of Olympics tickets have been cancelled, as authorities took the difficult decision to ban all fans from the Games.

As we try to make sense of the situation on the ground, we speak to Hiroyuki Akita, a veteran foreign and security policy analyst for the NIKKEI group, recently retired. He previously served as editorial staff writer, Washington chief correspondent, senior staff writer, and Beijing correspondent for Nikkei.

Ambassador Tedo Japaridze (TJ): Is public opinion welcoming of the Olympic Games, given the current risks?

Hiroyuki Akita (HA): Japanese public opinion has consistently divided into pros and cons as to whether the Tokyo Olympics should be held. However, as the event approaches, the number of opponents has tended to increase.

According to the opinion poll conducted by Asahi Shimbun on July 17th and 18th, 33% supported the Tokyo Olympics and 55% opposed it. Prime Minister Yoshihide Suga has promised to realise the “safety and security” of the Olympics, but 68% of the respondents said that it was “impossible” to achieve such an objective.

Compared to the United States and major European countries, Japan keeps corona infections at a relatively low level. In late July, the number of infected people nationwide increased to about 3,000 per day, but it is less than the record high of 7,957 on January 8. However, the infection is spreading rapidly in Tokyo, and the number of infected people per day has exceeded 1,000 in recent days. It is the highest level since January 2021, when the third wave of infection exploded.

If the pandemic had not happened, many Japanese people must have supported hosting the Olympics. However, due to growing anxiety about the outbreak of infection, an increasing number of Japanese people think that the conditions for the event are not in place.

TJ: Are Japanese authorities studying the lessons of other major sporting events? It is said that in the European Football Cup the main challenges were not stadiums, but what’s happening around them.

HA: About 10,000 athletes from about 200 countries and regions will visit Japan for the Tokyo Olympics. The Organising Committee has adopted a “bubble” method that blocks contact between athletes and the outside in order to thoroughly prevent infection.

Due to the bubble method, the range of activities of athletes staying in Japan is, in principle, limited to the round trip between the Olympic Village, the competition venue, and the training facility. Athletes use a dedicated bus to go back and forth between these places.

However, in addition to the players, about 41,000 people, including those involved in the tournament management and the media, will come to Japan. There are restrictions on these people, such as not being able to use public transportation for 14 days after entering Japan, and being able to go only to places where they have applied in advance.

However, it is not easy to monitor whether these rules are actually followed. It is unclear whether Japan will be able to adequately contain the infection during the Tokyo Olympics.

TJ: The cost for organising these Olympics has broken every record. What do you feel will be the legacy of these games for Tokyo?

HA: The Tokyo Olympics will be held this time without the audience. This made it difficult for Japan to receive the economic benefits that would have been gained from hosting the Olympics. In addition, Japan runs the risk of causing an outbreak if the Olympics are mismanaged.

However, I think it is the right decision for Japan to host the Olympics as planned. There are two main reasons. First, if Japan overcomes difficulties and succeeds in the Tokyo Olympics, it may become a catalyst that changes the atmosphere of Japanese society.

While suffering from the deflationary economy for many years, the Japanese are concerned that Japan’s prosperity has peaked in recent years and is heading for decline. In particular, the declining birth rate and the ageing of society are accelerating, making it difficult for the Japanese to have a bright outlook and confidence in the future of the nation. If Japan can successfully host the Olympics by overcoming the difficulties posed by the pandemic, it may bring about chemical changes that reverse the pessimistic mood of the people.

Second, if Japan gives up hosting the Tokyo Olympics, China will be the first country to host the Olympics since the pandemic struck the world. China is steadily preparing to host the Winter Olympics next February. China is expected to make the most of the Beijing Olympics to raise its national prestige.

China has succeeded in containing the infection by closely monitoring the movement of its people, while major western countries are still struggling to control the infection. Based on these achievements, China is promoting the discourse that “the Chinese Communist Party’s model of governance is superior to democracies.” If Japan gives up hosting the Olympics and China succeeds, it will reinforce these Chinese discourses. With democracies facing severe challenges around the world, this is by no means a desirable development for Western nations. Japan should be the first country to succeed in the Olympics in a pandemic.