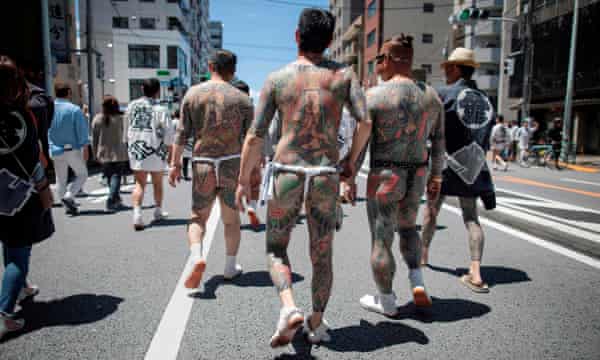 Adouble-whammy of skewed demographics and legal crackdowns has forced Japan’s yakuza crime syndicates to call on middle-aged men to do their dirtiest work, as they struggle to attract new blood to replenish their dwindling ranks.

For the first time since records began in 2006, 51.2% of regular yakuza members are aged 50 or over – with a noticeable increase in septuagenarians – according to a new report by the national police agency.

More than a decade of police crackdowns on major gangs and economic uncertainty are making it harder for the yakuza to tempt young men with promises of easy money. Instead, they face decades of risk-taking on behalf of their bosses and longer prison sentences – all without the prospect of a pension.

“Japan’s ageing population is a factor, of course, but the yakuza scene is no longer an attractive proposition for young men,” Tomohiko Suzuki, an author and expert on the yakuza, told the Guardian. “They have to sacrifice a lot to lead the life of a gangster, but for increasingly diminishing returns.”

Stricter laws, including those targeting businesses with links to gangs that had once operated with near-impunity, have made a life of crime increasingly unappealing: yakuza members are forbidden from opening bank accounts, obtaining a credit card, taking out insurance policies or even signing a contract for a mobile phone.

‘The times have changed’

A former gangster who retired in his 70s said he had witnessed large numbers of young men quickly become disaffected and leave within a year of being recruited.

“My generation dreamed about becoming high-ranking gang members who were popular with women, had money and drove fancy cars,” he told the Asahi Shimbun. “But the times have changed. Young people today don’t like the idea of being tied down to a gang.”

The ageing of the criminal community in Japan has coincided with a steady decline in membership. At its peak in the 1960s, the yakuza had more than 180,000 members, at a time when society clung on to a romantic view of mobsters as honourable outlaws.

The number has fallen annually since 2006, when there were 87,000 gangsters, including associates not officially registered as yakuza members. Today, just 14,400 men are registered mobsters – along with 13,800 associates – with the Yamaguchi-gumi, led by the 78-year-old Shinobu Tsukasa, the largest with 8,900.

Turf wars that were once settled by younger men eager to impress their bosses are now being waged by men well into middle-age. When two gangsters connected to a Yamaguchi-gumi rival were shot dead in the street last October, police arrested a 68-year-old suspect.

In the past, younger gangsters would commit crimes on the orders of their oyabun bosses and be out of prison still in their 40s with their reputations enhanced and financial futures secure. But longer sentences – including life terms for some murders – mean rewards for bravery and loyalty are no longer guaranteed.

“If you go to prison now, that’s practically the end of you,” Suzuki said, adding that older men whose livers have been ravaged by full-body tattoos and decades of alcohol and drug abuse, could “expect to die inside”.

Yakuza membership has been in free fall since the mid-2000s, as ordinary citizens pressured local authorities to drive out gangs after years of violent incidents, many involving the Kudo-kai, once a feared presence in the gritty industrial city of Kitakyushu.

Combined with more than two decades of economic uncertainty, stricter laws have weakened the yakuza’s role in Japanese social, political and economic life, Suzuki said. “Although the police won’t admit as much publicly – they don’t want to talk themselves out of a job – we have already entered a time when the yakuza are becoming irrelevant in Japanese society,” he said.

Now living alone in a cheap apartment in Osaka, the retired gangster interviewed by the Asahi said he had mixed feelings about a career living on the wrong side of the law.

“I have somehow managed to survive until now,” he said. “But I wouldn’t join a gang if I had my time again. I went to prison three times and now I have no family, no savings and no job.”