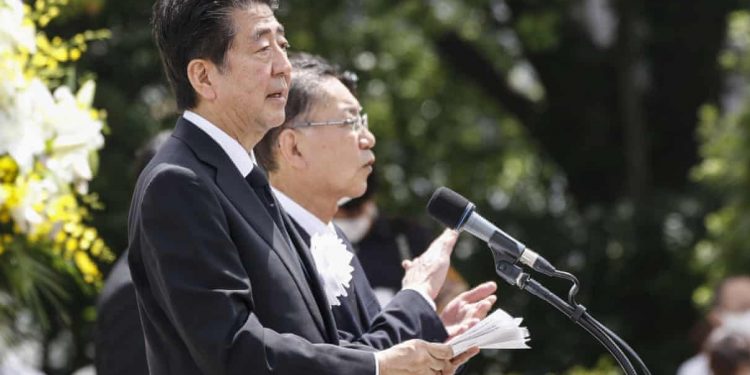 Survivors of the atomic bombings of 75 years ago have accused Japan’s prime minister, Shinzo Abe, of making light of their concerns after he delivered two near-identical speeches to mark the anniversaries of the attacks on Hiroshima and Nagasaki.

A plagiarism detection app found that Abe’s speech in Nagasaki on Sunday duplicated 93% of a speech he had given in Hiroshima three days earlier, the Mainichi Shimbun reported.

The English-language versions of the speeches on Abe’s official website also show a high degree of duplication.

The opening paragraph mentions each city’s name, and continues: “I reverently express my sincere condolences to the souls of the great number of atomic bomb victims. I also extend my heartfelt sympathy to those still suffering even now from the after-effects of the atomic bomb.” Aside from the ceremony titles, the passages match word for word.

Abe did, however, use different wording when referring to how each city had rebuilt in the years after Japan’s wartime defeat.

An estimated 140,000 people died immediately and in the months after the Hiroshima bombing on 6 August 1945, while 74,000 died during and after the attack on Nagasaki three days later.

Apart from the cities’ names, the statements’ closing paragraphs used the same wording, with Abe voicing hope for a world “without nuclear weapons”.

The apparent decision not to tailor the statements to each city’s experience angered survivors of the bombings, who are known as hibakusha.

“It’s the same every year,” Koichi Kawano, head of a hibakusha liaison council in Nagasaki, told the Mainichi Shimbun. “He talks gibberish and leaves, as if to say, ‘There you go. Goodbye.’ He just changed the word ‘Hiroshima’ to ‘Nagasaki.’ He’s looking down on A-bomb survivors.”

Haruko Moritaki, the co-director of the Hiroshima Alliance for the Abolition of Nuclear Weapons, accused Abe of inaction on nuclear disarmament, despite acknowledging the advanced age of the hibakusha.

“[He] says he will stay ‘in tune’ with atomic bomb survivors, who are advancing in years, but he has not taken concrete action. He’s all talk and no action, and that showed in his addresses,” Moritaki told the newspaper.

Survivors used the anniversaries to urge Abe to push for nuclear disarmament while they are still alive. But Japan, which relies on the US nuclear umbrella for its security, has not signed a treaty to abolish nuclear weapons adopted by the UN general assembly in 2017.

Abe did not visit the Nagasaki atomic bomb museum at the weekend, despite being asked to do so when he met hibakusha representatives last year. One survivor quoted by local media wondered why Abe had bothered travelling “all the way to Nagasaki”.

In an editorial, the Asahi Shimbun noted Abe’s desire for a nuclear-free world, but added: “His actions toward the issue are only adding to a sense of frustration and anger among residents in the atomic-bombed cities.”

Criticism of the statements came as Japan’s government said it would appeal against a recent ruling awarding state health benefits to dozens of men and women who lived outside the areas hit hardest by the bombings but who were exposed to radioactive “black rain” caused by the explosions.