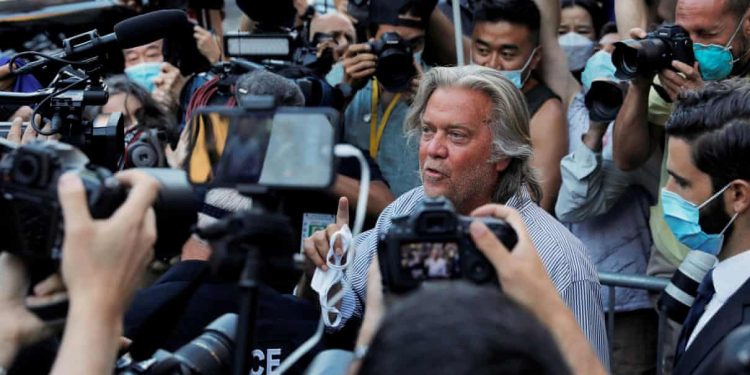 The former FBI director James Comey has said Steve Bannon is “in a world of trouble”, after the former Trump campaign manager and White House adviser was arrested on a charge of skimming donations from a fundraising campaign for a wall on the border with Mexico.

“It’s another reminder of the kind of people this president surrounds himself with,” Comey told CBS’s Face the Nation on Sunday.

Bannon is the latest figure with close ties to the president to have found himself in trouble with the law. Others include former campaign chair Paul Manafort, former lawyer Michael Cohen and former national security adviser Michael Flynn.

Comey is also a former US attorney for Southern District of New York, where Bannon was indicted last week.

“At this point they could almost start their own crime family,” Comey told CBS, echoing the passage in his book A Higher Loyalty, released in April 2018, in which he famously likened Trump, who fired him in May 2017, to mafia chiefs including Sammy “the Bull” Gravano.

“It’s a very serious case. The southern district of New York has laid it out in a very detailed indictment called a speaking indictment, and he’s in a world of trouble.”

Bannon has pleaded not guilty and faces up to 20 years in jail if convicted.

Bannon was released on a $5m bond, backed by $1.75m in cash or real estate. He has until 3 September to find the collateral. Three other men, Brian Kolfage, Andrew Badolato and Timothy Shea, were also arrested in the alleged scheme to defraud the We Build the Wall campaign, which authorities said raised more than $25m.

Kolfage, Badolato and Shea have not yet entered pleas. In a statement on his Facebook page on Saturday, Kolfage said he had “obtained one of the best super lawyers around who isn’t afraid to fight back at the politically motivated assaults against me”.

Bannon, Comey said, was “in trouble because the indictment lays it out in such detail, including excerpts from texts. If you’re Steve Bannon [or] you’re his lawyers, you’re reading this saying, ‘I’m going down here.’

“I don’t know what the next steps are for him and his co-defendants, but that’s what I meant by ‘world of trouble.’”

Comey has proved a troublesome adversary for Trump, who sought unsuccessfully, and infamously, to secure a pledge of personal loyalty before deciding to fire him as FBI director.

Comey recently announced a new book, Saving Justice: Truth, Transparency, and Trust, due for release in January. Also in January, after the presidential election, Showtime will release The Comey Rule, a two-part adaptation of A Higher Loyalty.

Comey is played by Jeff Daniels, Trump by the Irish actor Brendan Gleeson. In published cast lists, Bannon does not appear.