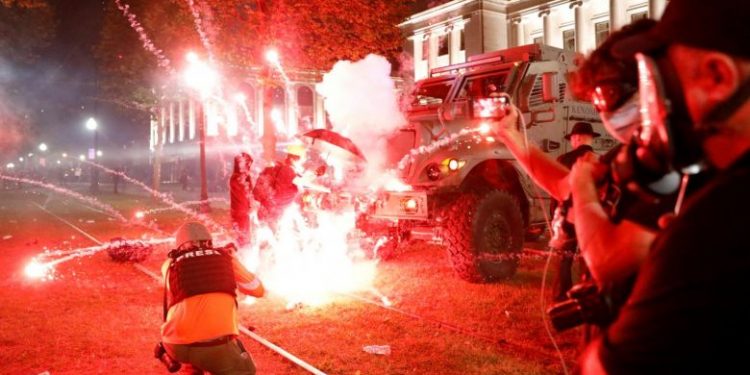 Three people were shot, one of them fatally, as gunfire broke out on the streets of the Wisconsin city of Kenosha on the third night of unrest sparked by the police shooting of Jacob Blake.

Social media video posted on Wednesday showed a gunfire among civilians, with several people rushing a man with a long gun who apparently had been knocked to the ground.

The video shows him firing at people coming towards him, one of whom falls to the ground. Several other shots are heard in the background.

“Stay down, stay down!” someone yells. “Keep going this way,” a voice says, apparently trying to guide others to safety.

Another video shows a man lying between parked cars with an apparent gunshot wound to his head.

A third shows a man wounded in the arm sitting on the ground being tended to by a man with a long gun as police approach.

Kenosha has been rocked by protests since Sunday, when police shot Blake in the back as he walked away from two officers and opened his car door, according to a bystander video that went viral. Three of his young sons were in the car, witnesses said.

Blake, 29, was left paralysed and “fighting for his life”, his family and lawyers said on Tuesday, hours before the latest round of civil unrest in the lakefront town. Police and protesters clashed on Tuesday night and early on Wednesday.

Officers in riot gear fired rubber bullets, teargas and flash-bang rounds to push back demonstrators who defied a curfew and gathered outside a courthouse and adjacent park in central Kenosha.

There were no apparent fires as there had been the previous two nights, destroying several businesses.

The night appeared to have turned calm but then gunfire erupted at about midnight.