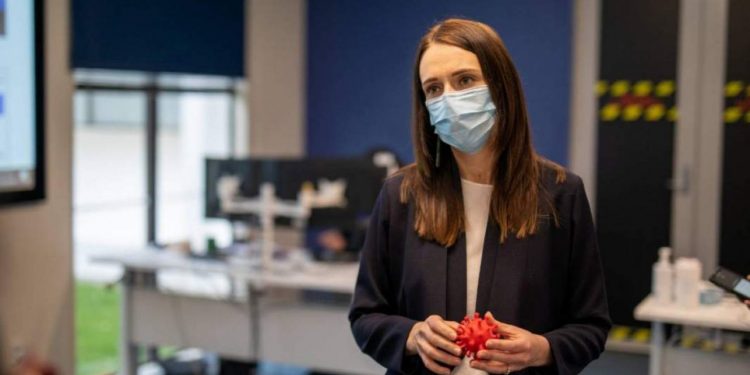 New Zealand’s biggest city will remain in lockdown until midnight on Sunday, the extra four days necessitated by the rising number of Covid-19 cases, the prime minister, Jacinda Ardern, has said.

A total of 101 people have been infected by the outbreak in south Auckland, making it the largest cluster in New Zealand.

Ardern said the cluster would have been significantly bigger if level three restrictions had not been imposed so quickly, as people had become infected at churches, shopping centres and on public buses.

“If it weren’t for level three, this cluster would be exponential, of that I have no doubt,” she said on Monday.

“This is a contained cluster. But it is our biggest one. And that means the tail will be long, and the cases will keep coming for a while to come.”

Ardern also announced that from Monday masks on public transport would be mandatory country-wide, although some, such as those with severe breathing difficulties, would be exempt.

Speaking to New Zealanders who have been demoralised by the second wave of the virus after 102 days of being Covid-free, Ardern acknowledged that 2020 had been exceptionally hard.

“If it feels hard – that’s because it has been,” she said. “But let’s also remember, in a world where 2020 has frankly been terrible, we are strong, we have been kind, and we are doing really well.”

The source of the outbreak is unidentified, and health authorities say it may never be known.

Epidemiological experts welcomed the lockdown extension and said it was the best way to eliminate the virus again.

“There are almost certainly still active, unidentified cases in the community with the potential to spark new outbreaks if we relax too soon,” said Prof Michael Plank of Te Pūnaha Matatini.

“The cases we have seen as a result of contacts between strangers on bus journeys are an example of how quickly this outbreak could spread.

“Provided the recent trend of cases continues, the extra four days at level three will give us a better chance of containing this cluster. We should also remember there is still a risk of the outbreak spreading outside Auckland.”

Associate Prof Siouxsie Wiles, a microbiologist and public health communicator from the University of Auckland, agreed.

“This is a pragmatic decision to ensure the current cluster is fully contained,” she said. “The last thing we want is to miss some cases that then turn into further community transmission.”

However, resistance to the lockdown is growing in Auckland. Dozens of people joined an anti-lockdown protest in the city at the weekend, saying their rights were being breached.

There are also daily reports that Aucklanders are failing to adhere to the lockdown rules as strictly as they did the first time.

Dr Dougal Sutherland, a clinical psychologist at Victoria University of Wellington, said the lockdown extension would be “disheartening” for many.

“Whereas the first lockdown was accompanied by an increase in anxiety for some, the recent return to level three seemed to bring with it a collective downturn in mood,” he said.

“The government announcement today could further erode our collective sense of hope.”