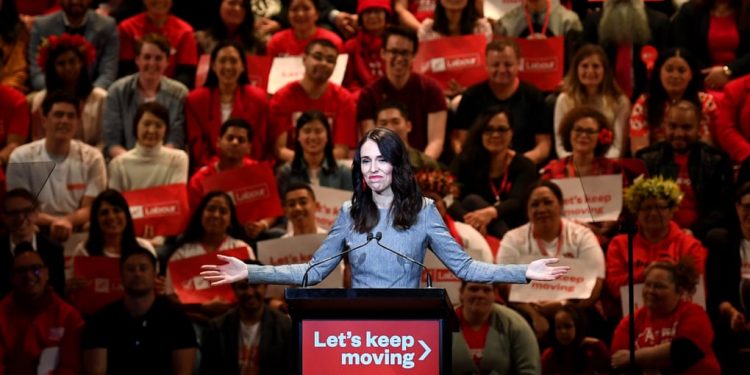 On her first public outing since launching her party’s election campaign the day before, New Zealand’s prime minister, Jacinda Ardern, spent Sunday morning at a farmers’ market in central Auckland where she walked among friends, posed for selfies and did her vegetable shopping.

Ardern is riding high in the polls – as is the Labour party – on the back of her stewardship of the country’s Covid-19 response. Her strong position has been aided by troubles within the opposition National party, which is heading into September’s election with its third leader in as many months.

Consequently, Labour is running a steady-as-she-goes campaign, anchored on New Zealand’s success as one of the few countries in the world to contain the Covid-19 pandemic and the personal popularity of the prime minister.

In 2017, the party campaigned on a need for change. The message this time is that changing the driver in a time of crisis is dangerous.

At the market in Grey Lynn, a trendy suburb known to be liberal left, not one person raised their voice against her. Instead, they queued for selfies.

Trust, and economic management of the fallout yet to come from Covid-19, are likely to be key factors when New Zealanders go to the polls, according to views expressed by those at the market.

“I think it is going to be fought on personality, record and who the public feels most comfortable with leading through the next period, where things perhaps have never been less certain,” said shopper Jerry Rickman.

“Economically the worst is to come and trust is a big issue. The election will be fought on her leadership. People admire [Ardern] irrespective of their political views. She’s done a wonderful job in terms of leadership on a number of tragic issues that have faced New Zealand and the world. I think she gets tremendous benefit there.”

Ardern looked relaxed as she bought a takeaway coffee and filled bags she’d brought from home. Her wide smile was replaced by a furrowed brow as she listened to stories of how people had coped when the country locked down from late March to early June.

Free-range egg vendor Carl Ebbers told Ardern he feared the worst when his usual outlets – greengrocers and cafes – had to close. However, online orders took off. “Community groups and friends and family got together to help and I sold a lot of eggs directly to people as well,” he said.

“I think the election will come down to trust, and that of course favours the incumbent prime minister. She’s done so well with Covid and all these emergencies we’ve had, the mosque attacks [in Christchurch].”

A surge of Covid-related support

Ardern’s standing in the eyes of Kiwis has soared this year. Polls in January suggested Labour was headed for a contested result or even a narrow loss but fresh surveys show the party, currently in coalition with New Zealand First, may be able to govern outright.

Labour’s internal numbers indicate the arrival of Covid-19 to New Zealand coincided with the party’s largest surge of support in decades. The party is banking on Kiwis’ belief that the Ardern-led government can take the credit for eliminating community transmission, and trust in the prime minister to manage the economy through the recovery.

“When people ask, is this a Covid election, my answer is yes, it is,” Ardern told her supporters in Auckland Saturday. The prime minister has said no one wants it to be, “but it has been our new reality, and one that the team of 5 million have made work in the most extraordinary way”.

The centrepiece promise of Saturday’s campaign launch was another new scheme to support employment: a $NZ310m pledge to underwrite 40,000 jobs. It is a government spend-up, possibly without precedent in this country, described by a political commentator as “going full Roosevelt”.

Ardern’s market walkabout came as New Zealand chalked up 100 days without a case of community transmission of Covid-19, and its fourth day without a new case in managed isolation, in marked contrast to Australia and many other countries.

Speaking to reporters at the market, Ardern emphasised the need for caution despite achieving that “milestone”. Countries facing a second wave of infections showed how difficult the pandemic is to manage.

Though not currently required to wear masks, Kiwis are being asked to be prepared by adding them to their emergency kits. Ardern has said she wouldn’t hesitate to halt her election campaign and lock the country down again if community transmission returns.

Rcently installed opposition leader Judith Collins has described the contest between herself and Ardern as between “someone who knows how to lead” and someone who “basically just communicates really well”.

But market-goer Dan Salmon said Ardern had earned her high level of trust, and criticism of Labour’s ability to manage the economy rang hollow.

Caryn Truppman, who described the prime minister as “a fantastic leader”, hoped she had “the gumption to make changes rather than people like Judith Collins and [former MP] John Key wanting rich people to come and buy houses in New Zealand. What sort of solution is that?”

To David Williams, manager of the Grey Lynn Community Centre which hosts the farmers’ market, Ardern had made the most of every situation. “Crises give politicians opportunities and she has dealt with them well and now she has a global reputation.

“I have female friends in the UK who she has become a totem for. When you compare her leadership with all the white male entitled leadership around the world, she is a shining light.

“When the election comes, that’s going to be a significant positive factor for the Labour party.”

Williams said wage subsidies rolled out by the government from March – and extended to September – kept the community centre (and his football club) afloat.

The National party’s focus on roads in its transport policy was lampooned by Ardern’s husband, television personality Clarke Gayford, in a speech introducing his wife to party faithful at the Labour Party’s campaign launch.

In his tribute to the prime minister, recently voted the “world’s most eloquent leader”, he said the last time they had a test of wills at home, he soon found himself floundering. “In a desperate bid to end it, I announced three new roads and a tunnel.”