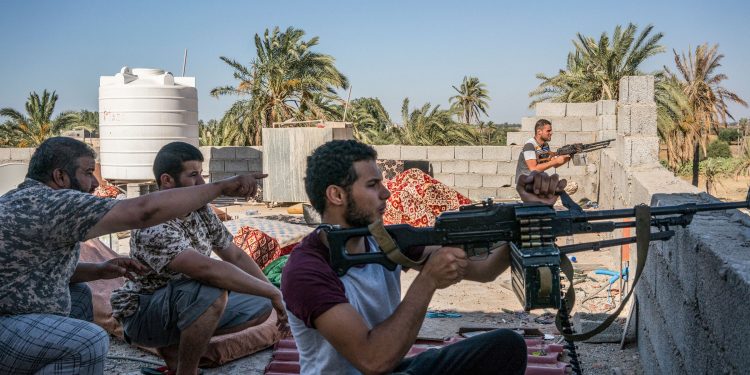 For 15 years Italy’s position on the question of Libya has been framed as an extension of migration-management concerns. In foreign policy terms, it is hard to pinpoint where exactly Rome stands with regard to the unfolding civil war in what was once its North African colony. To understand this ambivalence, a step back into some early 20th-century history is necessary.

Libya became an Italian colony in 1912, a significant event that shaped their  commercial relations. Also significant in terms of current developments, Libya is where Kemal Ataturk cut his teeth as a military leader of the Turkish nationalist movement.

Following the transition of decolonisation and ensuing tensions with the former colonial power, the two countries relaunched their relationship in 1956, when Rome stepped in to become a partner in the industrial and commercial reconstruction of Libya. Italy has never ceased being a stakeholder in Libya, even though its policies have proved hard to follow.

A milestone moment in Rome’s relations with Tripoli came in 2008 when Italy’s former Prime Minister Silvio Berlusconi concluded a new agreement with the former Libyan dictator Muammar al-Ghaddafi. As reported by Corriere della Sera, the agreement linked development cooperation to migration management, the latter part of the deal since becoming an independent variable in the relationship.

Also, it has become a recurring bone of contention between Rome and human rights advocacy groups that accuse Italy of prioritising the disruption of mass migration over adhering to basic standards of human rights, with many taking special note of the appalling conditions that prevail in Libyan migration detention centres.

In 2017, the Memorandum of Understanding (MoU) between the two countries was renewed by the then centre-left Italian Prime Minister Paolo Gentiloni and the leader of the Libyan Government of National Accord, Fayez al-Sarraj, in Tripoli. The MoU has come in for criticism from human rights lawyers, who claim it legitimises fundamental human rights violations and draws on the support of Brussels.

The final renegotiation of the MoU was in 2019, with a country embroiled in civil war. Negotiations were concluded in February 2020 between the centre-left Italian Minister of Interior, Luciana Lamorgese, and the head of the Government of Tripoli, Fayez al-Sarraj, adding to the overall controversy. The pact was roundly criticised in other EU member states as well as by civil society organisations.

In recent months, the MoU has returned to the forefront of the Italian news agenda. L’Espresso reports on increasing violations of fundamental rights in Libyan detention centres.

Following the June 2020 meeting between the Italian Minister of Foreign Affairs Luigi Di Maio (Five-stars Movement) and al Sarraj, Repubblica denounced the lack of transparency in the allocation of Italian and EU development aid being handled by the Emergency Trust Fund for Africa. Nevertheless, Di Maio hails the agreement  as one of “fruitful cooperation”, especially when citing its provisions for migration flow management.

Libya is clearly key to Italian national interests, both in terms of oil exploration and trade and in terms of migration flow management. But managing this relationship is becoming more and more difficult, given its implications and impact on the special relationship that now exists between the government of Tripoli and Ankara.

Italy’s current efforts to play the role of mediator in the crisis between Greece and Turkey, may not square with its relationship with Tripoli. Moreover, Rome also needs to maintain a balance in its relations with France since Paris supports the Hafter regime in no uncertain terms.

These conflicting interests lead to a strategically muddy position. In July this year,  the Italian Parliament approved further financial assistance for the Tripoli regime but only aftrer a contentious debate in both chambers of Parliament.

There was clear division and disagreement on Italy’s Libya policy between the Five-Star Movement and the Democratic Party. Left-wing MPs, particularly those from Renzi’s “Italia Viva” faction, introduced and passed amendments of public accountability, which others criticised these efforts as attempts at populism, claiming that diplomacy often needs secrecy.