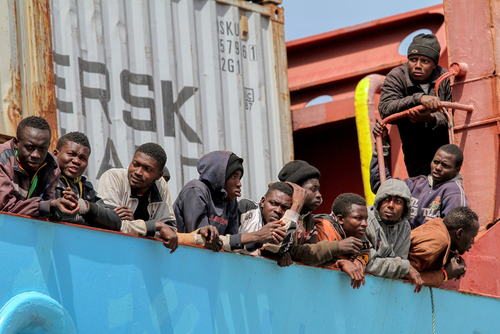 North African migrants refugees on a ship in the port of Taranto, Puglia, Italy - August 2015

Belgium, (Brussels Morning) The Italian government is under fire for refusing to allow about 250 asylum seekers to disembark from two nongovernmental rescue ships docked in Catania. Human Rights Watch (HRW) said yesterday that the Italian government has the legal obligation to rescue humanitarian ships.

Over the past weekend, the Italian government allowed the two rescue vessels – Humanity 1, operated by SOS Humanity, and the Geo Barents, operated by Médécins Sans Frontières (MSF) – to dock at Catania port temporarily.

Following government-ordered summary “vulnerability” assessments by two doctors selected by the Italian authorities, 144 people from the Humanity 1 and 357 people from the Geo Barents were allowed to disembark, mainly women, children, and men with physical health problems, HRW said.

One of the men forced to remain on the Humanity 1 subsequently collapsed and was evacuated by ambulance, leaving 34 on board. The authorities are refusing to allow 215 people to disembark from the Geo Barents. One of them had to be medically evacuated overnight, leaving 214 on board.

“The government’s actions cruelly expose survivors of abuse in Libya to potential further harm, and deny them their right to seek asylum in defiance of Italian and international law,” said Giulia Tranchina, Europe and Central Asia researcher at Human Rights Watch. “No one should be deliberately exposed to degrading conditions, and everyone should be allowed to disembark and have their claims for international protection fairly processed.”

The “vulnerability” assessments were carried out by physicians without the assistance of interpreters or psychologists and appear to have been based primarily or solely on evaluations of physical health. Under these conditions, exhausted survivors would have had limited capacity to provide any details about their full medical condition, mental health problems, or experiences of abuse. Journalists were denied access to the dock, prompting criticism by the European Federation of Journalists.

Most of the migrants are coming from Libya, a place not safe for asylum seekers, so survivors rescued at sea cannot be lawfully required to disembark there.  Italy and Malta are the closest coastal states to Libya with the responsibility to ensure that all rescued people can disembark promptly.

Captains take the government to court

Italian authorities have ordered both rescue ships to leave the port with people on board, arguing that the flag states – Germany and Norway – are responsible for those who remain. The captains of both ships have refused to follow the order, and SOS Humanity says it is taking the Italian government to court to challenge the lawfulness of this policy and allow the survivors to exercise their rights to disembark and seek asylum.

International human rights and refugee law, as well as EU legislation and the EU Charter on Fundamental Rights, guarantee the right to seek asylum and prohibit collective expulsions. Under maritime law, a rescue is considered concluded when all rescued people have disembarked promptly in a place of safety.

Two other rescue ships operated by nongovernmental organizations had been waiting in the Mediterranean for the authorities to assign them a port. The Ocean Viking, operated by SOS Mediterranee, has 234 people on board, while Rise Above, operated by Mission Lifeline, has 89. They have been experiencing bad weather conditions and high waves. Six people had to be medically evacuated from Rise Above. On the evening of November 7, Italian authorities finally told the Rise Above it could dock at the port of Reggio Calabria, while the Ocean Viking was still stranded at sea.

According to HRW, since October 20, nongovernmental rescue ships rescued about 1,000 people, while in the same period over 11,000 people arrived in Italy by sea autonomously or following rescues by the Italian Coast Guard.

“Trapping people on ships or stranding them at sea is not serious immigration policy: it’s just inhumane and unlawful theater,” Tranchina said. “Rather than violating people’s rights and alienating European partners, Italy should be advocating a predictable system for people to disembark and the resumption of state-led European search and rescue operations, alongside an equitable system for sharing responsibility for migrants and asylum seekers.”