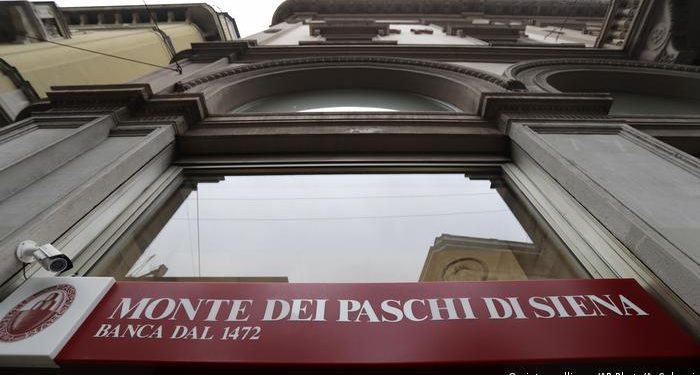 Brussels (Brussels Morning) Italy is still struggling with its stake in the world’s oldest bank, Monte dei Paschi (MSP), as billions of euro of potential legal liabilities make the bank a difficult candidate for privatisation.

Citing three sources close to the government’s plans for the bank, Reuters reported that the state has given up on an insurance scheme that had aimed to reduce the legal risks posed by bank, and is now weighing an option in which it would spin off most of the bank’s potential liabilities.

Italy found itself the owner of a 64% stake in the bank after a 2017 bailout, which cost the Italian taxpayers 5.4 billion euro. The world’s oldest continually-operating bank and currently the fourth-largest bank in Italy faced years of troubled performance which led to the government bailout. However, the state has since been attempting to cut its stake in the lender arrangement more or less ever since.

A potential takeover deal between the Italian banking giant UniCredit and MPS fell through earlier this year, as a number of UniCredit’s investors opposed the merger. UniCredit’s new CEO, Andrea Orcel, is currently focusing on an internal restructuring of Italy’s second-largest bank, and is less than interested in taking on a liability-laden expansion.

MPS currently faces approximately 10 billion euro of legal risks, a significant obstacle to any government attempt to sell off its stake. Meanwhile, the bank needs to raise around 2.5 billion euro of fresh capital by 2022 if it is to remain financially stable.

The latest government plan, to spin off the bank’s legal risks into a separate entity, would go a long way towards reducing the liabilities to under 5 billion euro. However, such a move would require approval from the European Commission’s antitrust watchdog, since it would represent significant state aid for the ailing bank.