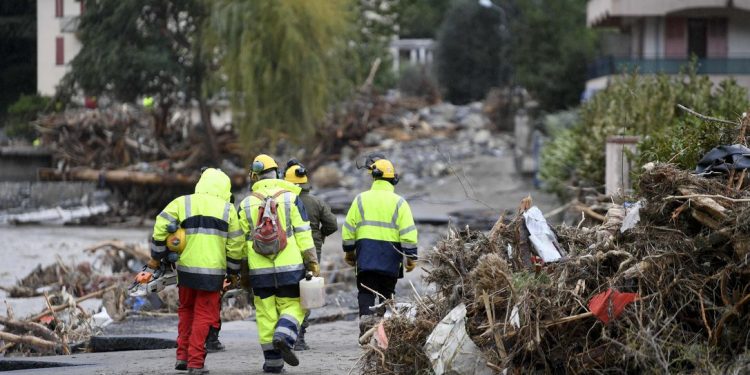 Italian and French rescue crews are stepping up their search efforts after at least seven people died and ten others are missing following severe weekend flooding and extensive damage in the two countries, DW reported on Sunday.

Seven bodies were found in areas along the border between Italy and France, officials of the two countries said, with two people e missing in Italy and eight in France The rescue teams are cooperating on identification of the bodies.

Many villages in Italy and France have been cut off due to the damage caused by the storm that swept through France on Thursday and reached Italy on Friday and Saturday.

France has declared the affected region a natural disaster zone, with some 1,000 fire fighters concentrating rescue efforts on the Roya Valley in south-eastern France.

France’s Prime Minister Jean Castex said the army had been deployed to aid in rescue efforts, the government having implemented its natural disaster emergency plan. Having inspected the damage by helicopter, Castex said it was a matter of real concern that the numbers of missing could increase, given that the flood had swept away houses and automobiles.

Local authorities have provided shelter to some 200 people, with food and water airlifted to remote villages that have been cut off, RFI reports. French Alpes-Maritimes region prefect Bernard Gonzalez called on families of the missing not to give up hope, pointing out that communication has been disrupted, with many landline and some mobile services out of commission.

Cities in the Piedmont region in Italy have been hit especially hard. Limone Piemonte municipality head Massimo Riberi called the situation is catastrophic.

The heads of Italy’s Piedmont and Liguria regions, Alberto Cirio and Giovanni Toti, jointly called on the government to declare a state of emergency, noting that several villages had been cut off.

Cirio pointed out that rainfall in the past days had been the heaviest since 1954. Before the storm hit, the region was already struggling with the impact of the coronavirus pandemic, he noted. Regional tax revenue had been reduced by some Euros 200 million this year making government intervention wasessential if the region is to recover, he declared.