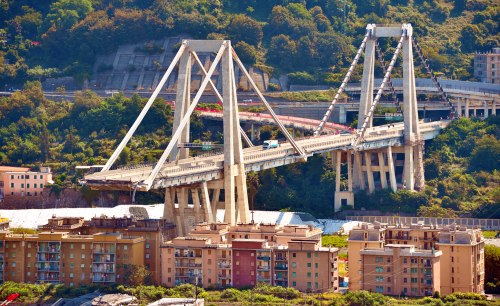 Brussels (Brussels Morning) Italian prosecutors, concluding the investigation of a catastrophic road bridge collapse in 2018, have called for 59 suspects to be formally charged and tried, including  the road management company’s executives and its former CEO Giovanni Castelluci.

The Ponte Morandi, a road viaduct in Genoa, collapsed during a rainstorm in 2018, killing 43 people. Situated along Italy’s A10 motorway, the bridge was operated by the Autostrade per l’Italia company, in which the Benetton family’s conglomerate Atlantia held an 88% stake.

The ruling coalition at the time, led by Prime Minister Giuseppe Conte, largely blamed Autostrade for the collapse, with the Benetton family also coming under scrutiny. Castelluci promised to rebuild the bridge within eight months. Its replacement was finally completed in August 2020.

Ultimately, Castelluci was ousted as CEO of Atlantia, while the company sought to disinvest from Autostrade. It reached a deal with state lender Cassa Depositi e Prestiti (CDP) in February this year, which would see the road management company, valued at approximately 11 billion euro, change hands.

In their conclusion of the investigation, the prosecutors blame the managers of Autostrade and its engineering division SPEA for failing to properly determine the structural integrity of the bridge, and for their failure to perform the necessary maintenance to address serious issues which emerged soon after the bridge was opened in 1967.

Castelluci, Antonio Galatà, the former SPEA head, and 57 other suspects are to be charged with homicide, forgery and malicious omission of precautions to prevent disasters. They face maximum possible sentences of 15 years in prison.

SPEA itself will also stand trial as a legal entity, since Italian law also allows companies to be held accountable for the actions of their management. A number of former government employees, namely Transport Ministry officials, are to stand trial as well.