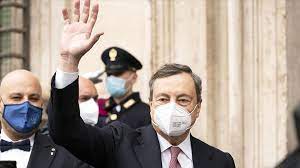 A former European Central Bank (ECB) head, Draghi was tapped to form a new government in February this year, following the fall-out within the then-ruling coalition which resulted in the resignation of Prime Minister Giuseppe Conte.

As Draghi was trying to assemble a majority in the parliament, Italy’s economy was stagnating, devastated by the coronavirus pandemic. It urgently needed to move ahead with long-delayed reforms if it was to access the nearly 200 billion euro earmarked for Italy by the EU’s recovery and resilience fund.

An experienced technocrat with deep insight into Italian economy, Draghi was quickly embraced as an ideal PM candidate by nearly all the parliamentary parties, resulting in what is probably the largest parliamentary majority in the history of Italian democracy. Draghi’s government, notable for its exclusion of party leaders, is composed of a mix of independent experts and representatives of political parties. It received the backing of 561 deputies in the 630-seat lower house.

However, the largest parliamentary party, the populist 5-Stars Movement (M5S), is now opposing Draghi’s judiciary reform, one of the key steps in the EU-approved coronavirus recovery plan for Italy. The draft legislation aims to streamline the judiciary and reduce Italy’s infamous backlog of cases. M5S claims this would result in scrapping thousands of ongoing trials before verdicts are reached.

With the implementation of other key reforms awaiting resolution of the judiciary overhaul, Draghi has said he would put the proposed reform to a vote of confidence in the parliament, early next week. This would limit the debate on amendments and push the reform through if the vote returned is in favour.

Technically, should the vote fail, the government would be forced to resign, although the chances of that happening are very slim, since Draghi would likely continue to command a majority even without the M5S’s 160 deputies. Nonetheless, the departure of the party from the government would represent a major blow to its stability, and could well result in the departure of four ministers, including Foreign Minister Luigi Di Maio and Agriculture Minister Stefano Patuanelli.

Since resigning, former PM Conte, who led a government coalition between the M5S and the far-right League as an independent, has joined the populist party. On Tuesday, he, expressed dismay at the prospect of the proposed judiciary reform passing in its current form. Conte said he doesn’t even want to consider the possibility that the reform will remain unchanged, although he declined to say what his new party would do if the reform is pushed through.