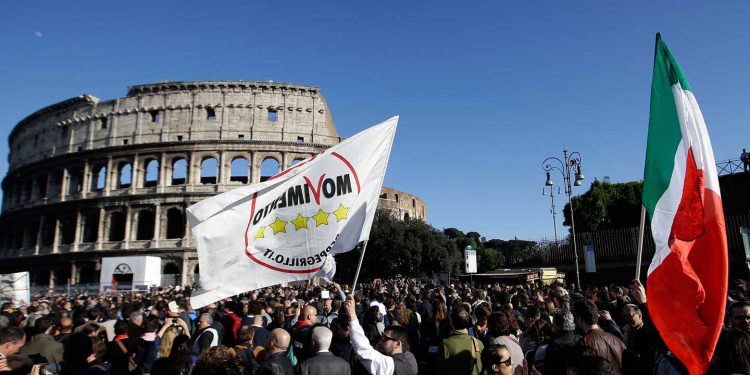 In an interview with Brussels Morning, Italian MEP Fabio Massimo Castaldo comments on developments in Northern Africa, the Middle East and his concerns for the human rights situation in Saudi Arabia.

Brussels (Brussels Morning) Fabio Massimo Castaldo of the Italian Five-Star Movement is among a group of MEPs from across the political spectrum that a few weeks ago insisted on a European Parliament resolution on Saudi Arabia’s treatment of migrants crossing the border from Yemen. Migrant workers from Asian and African countries are similarly under pressure in Saudi Arabia since they too are restricted in their movements by the notorious Kafala system that limits their rights and freedoms and puts them at risk of exploitation. Because of the corona outbreak, migrant workers in the Gulf states are at even greater risk of discrimination and ill-treatment. Of particular concern is the situation in detention centres along the Saudi border with Yemen, where at least some 30,000 Ethiopian migrants are known to be held, deprived even of access to their most basic needs.

BM: Freedom of expression does not prevail in Saudi Arabia. Human rights defenders are arrested without charge and then not brought to court. Mohammed AlQutaibi serves a 14-year prison sentence for his work to advance human rights. What is your message to Saudi Arabia in that regard?

MEP Fabio Massimo Castaldo: The authorities in Saudi Arabia have promised to improve the human rights situation there. When Mohammed Bin Salman took over and became a prominent figure, he pledged to change the approach and break with the past. Let me say that this commitment is not enough and does not amount to the promised reforms. We are again calling for more freedom and a greater voice for the Saudis who are still facing restrictions and gender-oriented discrimination.

We also recall the terrible murder of Jamal Kashoggi, a case in which the judicial investigation still has not established responsibility for the killing of a renowned and respected journalist.

BM: Qatar has recently undertaken some procedures to improve the situation of migrant workers. How does the EU look at these measures?

MEP Fabio Massimo Castaldo : The situation in Qatar is similar to that in the United Arab Emirates and Bahrain in terms of the Kafala system. A massive number of workers have come from Africa and Asia to work in construction for the World Cup Tournament in 2022. FIFA, the international governing body of football, has urged the adoption of tangible reforms and Qatar has responded by adopting some changes, including the ratification of human rights treaties to ensure racial equality.

For the first time, the Kafala system will be limited in Qatar giving migrant workers the right to change their workplace, without the consent of their sponsor. We encourage these steps and call on Qatar to continue reforms in this regard.

BM: According to a 2019 report by Amnesty International, prison conditions in Bahrain remain poor with overcrowding, inadequate supply of beds and health concerns affecting the prisoners. Do you have a message for the authorities of Bahrain?

MEP Fabio Massimo Castaldo: The situation in Bahrain is still worrying, especially concerning the death penalty, although Bahrain did commit to put an end to that. Out of tsix recent executions, evidence in five cases was allegedly obtained by physical and psychological torture. These practices verify the contention that arbitrary killings and arrests occur in Bahrain.

I am particularly concerned that there are new tools now in the hands of police to threaten civil society activists and journalists critical of the authorities in Bahrain. Furthermore, opposition parties have been dissolved, some media outlets closed, and some prisoners deprived of adequate medical help.

I strongly urge the European Union to address the situation in terms of its relations with Bahrain and to pressure the country to respect the human rights of political prisoners and their families.

BM: In March 2020, 56 members from the UK’s House of Lords signed a petition against trafficking of women from Eastern Europe to the UAE. Despite repeated calls to take measures to address the situation, the UAE has yet to make an effort to put an end to this. What do you say in this regard?

MEP Fabio Massimo Castaldo: Regarding the wider picture, the system used for foreign workers inside the UAE is truly disturbing since it does not respect the International Labour Organisation’s standards and commitment, especially in the way it applies the Kafala system to people coming from poor countries. Practically, there is still a gap in the implementation of the legislation. Then again, there is the issue of the commitment of the authorities to investigate all alleged cases reported about low-skilled workers and forced prostitution of young girls.

BM: Reports showed and revealed a vast illicit gold market in which the UAE plays a key role as a major trading hub. The revenue from gold smuggling appears to finance jihadist radicalisation and armed conflict in Africa and the battle for gold mines in the Sahel region. Is there any mechanism in place to reduce illicit financial flows to terrorists in the Sahel region? Can the EP put pressure on the UAE to combat this phenomenon?

MEP Fabio Massimo Castaldo: Let me say that since the Reuters investigation in 2019, funding diverted to suspected terrorist groups has become one of the most important discussions in the fight against terrorism.

Meanwhile jihadists have managed to find new resources for their activities, by getting their hands on mines in fragile countries including Burkina Faso, Mali, Togo and Niger. Illegal gold has become the new standard currency since gold does not lose its value and is easy to smuggle. Main destinations for illegal gold are Saudi Arabia, Turkey, Switzerland and more significantly the UAE, which is the most important destination.

The EU is aware of this phenomenon and urges the UAE to work against money laundering that enables terrorists to increase their resources, thereby funding organised crime.

BM: Some children are smuggled from Sudan to fight as child soldiers in the conflict in Yemen. While we go after the states where the war is fought, we never go after the countries funding this practice. Can the EU play a more assertive role in this regard?

MEP Fabio Massimo Castaldo: I am extremely worried and concerned by the situation on the ground, given that the issue of child soldiers is a growing phenomenon. It is a true war crime according to both the Geneva Convention and the Convention of the Rights of the Child.

The situation of deploying children in the conflict by the coalition sponsored by Saudi Arabia and the UAE is alarming. Now Yemeni schools are being used as military bases and teachers are being threatened by militias to let children participate in the war, adding to the vast numbers of victims among civilians in Yemen.

All these elements should lead the European Union to insist on the application of human rights conditionality and reconsider the weapons exports to these countries. The EU needs to prove that it is a credible actor and that it does not apply double standards.