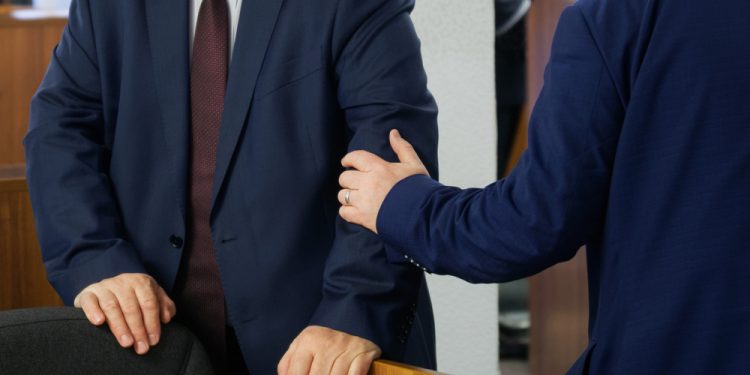 Politicians or businessmen greet each other before the start of a meeting or conference. Preparing for a decision. Head and subordinate. Patronage.

The lobbies warn that under the terms of prevailing criteria, many borrowers could be classified as being in default and that this would severely restrict their access to loans and therefore their chances of recovery.

Italian banks previously flagged similar concerns. Citing the stricter definition of default due to comes into effect in January, they caution that the so-called calendar provisioning rules force banks to reduce book value of impaired loans over a set period.

While the calendar provisioning rules serve as an incentive for banks to adopt more restrictive lending policies and to pre-emptively sell loans, they warn that this militates against adopting forbearance measures aimed at supporting economic recovery.

The group is lobbying for the relevant rules for secured and unsecured non-performing loans to be temporarily amended for at least two years, arguing that this would alleviate negative effects to the credit supply.

In addition, the group is calling for postponement of the stricter definition of default, scheduled for January, along with the extension of the three-month late payment threshold to six months.

According to government forecasts, Italian GDP should drop 9% this year because of the coronavirus restrictions, which have put many businesses in jeopardy.

Italy has suffered the highest coronavirus death toll in Europe, but consumer and business morale improved this month despite the negative epidemiological trends and restrictions, Reuters reported last week.

While GDP grew 15.9% in the third quarter compared to the preceding quarter, the government expects the economy to contract 9% this year, followed by growth of 6% next year.