‘It will be different’: virtual Democratic convention kicks off with emphasis on unity 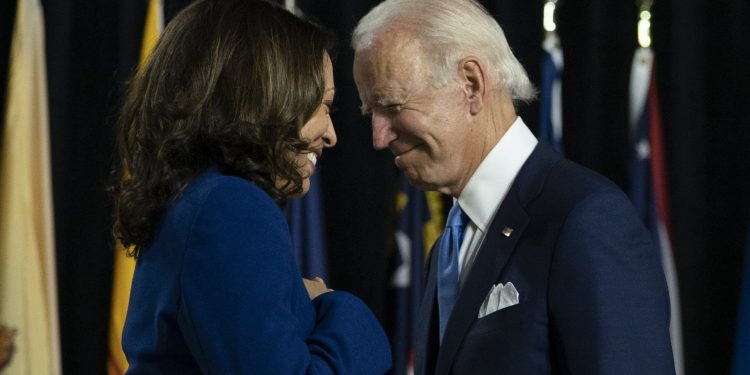 The Democratic national convention begins on Monday with a star-studded lineup and heavy emphasis on unity aimed at presenting Joe Biden and Kamala Harris as the US’s best hope for healing a deeply divided nation reckoning with the parallel crises of a global pandemic and racial injustice.

The party’s four-day presidential nominating convention has been entirely reshaped by the public health crisis. Originally planned for Milwaukee, Wisconsin, in mid-July, it has been forced into a compacted, virtual affair, renamed the “Convention Across America.”

The event, which usually draws thousands of the party faithful to a single city for days of celebrating, deal-making and politicking, will now take place from remote locations across the US. There will be no roaring crowd, bespoke thunder sticks or oversized balloons.

Biden is scheduled to formally accept the Democratic presidential nomination on Thursday, delivering the most consequential speech of his decades-long career from a mostly-empty ballroom, near his home in Wilmington, Delaware.

“There’s no doubt about it – it will be different,” Tom Perez, the chairman of the Democratic National Committee (DNC), said last week.

The programming, reduced to just two hours each night from 9pm–11pm ET, was arranged to reflect the depth of Biden’s political coalition, aligned in opposition to Donald Trump. It stretches from the Republican former governor of Ohio, John Kasich, to the democratic socialist senator from Vermont, Bernie Sanders, both of whom are scheduled to speak on Monday night.

It also includes two of the most famous couples in American politics: the Clintons and the Obamas as well as “everyday Americans”.

Biden enters the final stage of the campaign in a strong position, though Democrats are bracing for the race to tighten. Biden leads Trump by wide margins in national and battleground surveys.

An NBC News /Wall Street Journal poll released on the eve of the convention found Biden with a nine-point lead over Trump nationally, with more than 60% of Americans saying the administration’s response to coronavirus has been unsuccessful.

According to the survey, Biden holds a wide advantage over Trump on nearly every issue except the economy, which voters say is a priority this election.

At this same time, Biden’s selection of Harris has exhilarated supporters, who showered the campaign with a stunning $48m in the 48 hours after she was announced as his running mate. The vast majority of Democrats – and, notably, one in four Republicans and a majority of independents – approved of Biden’s choice of running mate, a new ABC News/Washington Post poll found.

Democrats anticipate the excitement around Harris’s historic candidacy as the first Black woman nominated for national office by a major party, will build momentum around the convention – and the new Democratic ticket. Harris will address the nation on Wednesday, 100 years and one day after the ratification of the 19th Amendment, which guaranteed American women the right to vote.

“I think people are feeling every bit of that historic reality,” said Adrianne Shropshire, the executive director of BlackPac, a super Pac focused on Black Democrats. “I think there is also real relief that there is a ticket people can believe in, and get behind and push over the finish line.”

Amid a national reckoning on racial injustice, Biden’s team has devoted significant primetime space to prominent Black leaders. Barack Obama will deliver the keynote address on Wednesday, after Harris speaks. There will also be a tribute to the late civil rights leader and congressman John Lewis.

Celebrities and entertainers such as Common, Billie Eilish, and John Legend will perform, alongside teachers, factory workers, frontline healthcare workers and business owners who have been asked to share their stories, which are intended to emphasize the impact of Trump’s failure to contain the pandemic on working class Americans.

But converting what is traditionally a high-octane production into what has effectively become an evening Zoom conference, has posed significant logical and technical challenges for organizers.

The convention will still be “anchored” at the Wisconsin Center in Milwaukee, but speakers will deliver remarks, many of them pre-recorded, from various locations, as delegates cast ballots remotely.

The event is not only an extraordinary logistical test for the Biden campaign, but a critical piece of the mission to galvanize supporters and unify Democrats, four years after bitter infighting between the moderate and liberal wings of the party erupted in protests and jeering on the convention floor in Philadelphia.

This year, Democrats head into the convention with a shared sense of purpose, said Jeff Weaver, a top Sanders adviser who was involved in an effort to forestall protests at the convention in 2016.

“All of us – and by that I mean the people who were in the Bernie campaign, the people in the Biden campaign, and people outside of both of those campaigns – have really worked hard to create an effective and genuine popular front against Donald Trump,” Weaver said, adding: “Trump is a very unifying factor.”

The curent mood within the party is a testament to those efforts. As late as March, political strategists were openly fretting the competitive Democratic primary might result in a contested convention. Concern dissipated when Biden decisively won the South Carolina primary and his former competitors aligned behind him.

Still, progressives were angered by the decision to give virtual podium to billionaire Michael Bloomberg and not Julián Castro, both of whom ran against Biden in the Democratic primary. The relatively few speaking slots reserved for Hispanic politicians further frustrated activists, who have warned that Biden must do more to appeal to Latino voters, especially younger ones.

And California congressman Ro Khanna, a national co-chair of Sanders’ 2020 campaign, announced that he would vote against the Democratic party platform because it does not include support for Medicare for all.

Though divisions linger, the virtual format affords little opportunity for public displays of dissent. Democrats met remotely to hammer out the details of a lengthy platform, which draws heavily from the policy recommendations issued by the joint Biden-Sanders taskforces.

The opening night will conclude with a keynote address from the former first lady Michelle Obama, considered one of the most compelling speakers in Democratic politics after her soaring speech in 2016 when she introduced the maxim: “When they go low, we go high.”

Jill Biden is the headline speaker on Tuesday night, after convention delegates formally nominate her husband in a “roll call” vote of all 57 US states and territories.

Former president Bill Clinton will also speak on Tuesday, and Hillary Clinton, the 2016 Democratic nominee, will give remarks on Wednesday.

Alexandria Ocasio-Cortez, the progressive New York congresswoman who once observed that she and Biden would probably belong to different political parties if they lived in another country, was allotted 60 seconds on Tuesday night, a clipped appearance some supporters viewed as a slight.

The convention culminates Thursday evening with Biden, who will deliver a speech he has been trying to make since he first ran for president in 1988.

Howard Dean, a former chair of the DNC who has attended every party convention since 1980, said the new format could work in Biden’s favor.

Unlike Trump, who feeds off the energy of crowds at rallies but can look wooden and uncomfortable when reading from a teleprompter, Biden, Dean said, “does better on television than he does at a podium”.

“This helps him because he will be on TV projecting calmness, reasonableness and thoughtfulness,” he said. “And that’s what people are desperate for right now.”

Democrats began downsizing their convention months ago, when it became clear the virus would continue to be a threat throughout the summer. What started as a 4-day event with 24 hours of programming was eventually scaled back to just eight hours total.

By contrast, Trump forced party officials to move the Republican presidential nominating convention to Jacksonville, Florida, from Charlotte, North Carolina, after state leaders there said they would require participants to abide by social distancing rules.

A month before the event, Trump abruptly cancelled the in-person portion of the event amid a deepening coronavirus outbreak in Florida and across the region.

Now Trump says he plans to deliver his re-nomination speech from the White House lawn, an unprecedented use of federal property for a partisan political event that critics say may violate ethics laws.

For viewers at home, the virtual nature of the convention will be a reminder of the stakes in November, with the economy in tatters and nearly 170,000 Americans dead from the coronavirus, said Leah Daughtry, who ran the party’s Democratic conventions in 2016 and 2008. She said the occasion presents an opportunity for Democrats to demonstrate a sharp contrast in leadership with the president.

“We didn’t want to endanger anyone – not just the delegates, but the people who are working in the hotels and the restaurants and the airport workers who would have to be on duty in order to help our convention run,” she said. “I think that’s a key talking point, as we have a president who seems to still not understand the depth and the breadth of this virus.”